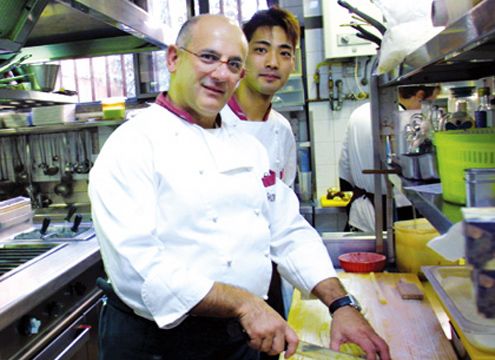 OK, I have no life outside of here,” Sadler admits cheerfully.|

You can’t fault Claudio Sadler for not giving his all. Look at him: He’s worn out and has a cold. Even when he’s healthy, he can’t find time to play tennis or swim a few laps at the local pool to shed the few extra “chef’s” kilos neatly deposited around his pot-bellied waist. Sadler, who runs Sadler and Sadler Wine and Food, both in Milan, and the Tokyo restaurants Sadler and Estasi, is utterly possessed by the business of food. “My social life is among the tables,” he says sheepishly.

After more than two decades in the kitchen, Sadler, a Michelin-starred chef, has made all aspects of restaurant management a cornerstone of his daily routine. It’s a demanding pledge. “OK, I have no life outside of here,” he admits cheerfully.

But a day at Sadler’s side demonstrates anything but a single-minded gourmet. One Sadler sings along to the radio, bopping around an empty dining room like an awkward teenager (Lunapop’s “50s Special” is playing), another works the phones arranging banquets and coordinating his catering business. There’s the Sadler who picks out the new contemporary art for his dining room (the current group is by the late Emilio Tadini), and the one who prepares lesson plans for his cooking school, q.b. (quanto basta, or “to taste.”)

There was also the pre-businessman Sadler, who rose well before dawn to shop at the local fish market. Now, there’s the order-inspector, who takes me to the fish market at 5 a.m.

IT’S A BUSY Saturday morning at Gloria and Loris Bocconi’s Fish Point, which provides about 40 restaurants in Milan,

including Sadler’s, with a daily supply of fresh seafood. The stand is located across the street from the sprawling local market at Piazza XXIV Maggio, in the public-housing-by-day and hipster-bar-and-bistro-by-night Navigli district that also includes Sadler’s restaurant.

After parking his silver Toyota Rav 4, Sadler banters with his partners before chatting up Loris Bocconi, the stand’s owner. Ice is ubiquitous: on the floor, keeping the fish fresh in their crates. First, Sadler inspects the John Dory, a homely, large-headed fish known for its succulence. He carefully eyes the bass, limiting himself to picking up samples weighing over four kilos, since smaller ones, he says, are surely from farms. He turns to the skate, freshly caught — perfect as a compliment to fresh pasta. With Bocconi at his side, Sadler mimes a reaction to the ammonia smell that skate emit if they’re more than two days old. He probes the giant squid steaks, more than an inch thick. The assembled group giggles as Sadler stretches his arms and contorts his face, to resemble a squid off the page of a Jules Verne novel.

His order gathered up, Sadler returns to the car and we head back to the restaurant. While driving, he goes back in time, remembering how it began. He followed his first culinary training with 13 years of teaching at Milan’s Scuola Alberghiera di Milano. He opened his first restaurant, in 1982, in Pavia. He would later co-found Jeunes Restauranteurs d’Europe, an organization that promotes young chefs of exceptional talent. “I was [an active member] until they kicked me out three years ago for being too old,” he says, feigning dejectedness. The age limit for membership is 45. Now, he seeks solace and gourmet companionship in Milan-based Le Soste, an exclusive group of “elite” restaurateurs, producers and importers of wine and liquors. If Le Soste has a downside it is that its members show a lack of enthusiasm, the result, perhaps, of success.

But Sadler remains energetic and curious.

He opened his first Milan restaurant, Osteria di Porta Cicca, in 1985. When he moved a few blocks away, a decade later, the place took on its current look: Light wood, frosted glass and brushed metal. Sadler also refined his grail to provide the diner with fresh, innovative dishes; there are frequent menu changes. His aim is not surprise, he says, but just to please. And please he did. When his Italian success firmed up, he worked with Japanese investors to take his cuisine to Tokyo, where it has flourished.

In Sadler’s own kitchen, the average age is about 25, including the head chef. Movement is constant, except when Sadler himself — the executive chef — is cooking. Then, his chefs chop a bit more slowly, stealing furtive, wide-eyed glances at their teacher and mentor. Kitchen life is eventful: A Japanese chef rushes up to Sadler in street clothes and Pumas and excuses himself from the kitchen. Sadler bows, then calls after the boy to say hello to “mama” for him.

Later, Sadler speaks of his enormous respect for the Japanese, for their work ethic, their love of learning, and their talent for pizza. He is visibly proud of his Japanese ventures. He opened his Tokyo Sadler restaurant and trattoria-pizzeria known as Estasi in April 2003. “That pizza is good, no kidding;” he says, “better than most you find in Italy.”

He visits Japan five to six times a year and has trained most of his Tokyo chefs. “I love teaching,” he says, “and writing my books — I’m on my fourth; it’s really fun.” (They include: Sadler: Menù per quattro stagioni, Le ricette di pesce, Le ricette per il dolce).

In his rare free time Sadler sheds accumulated stress in Tuscany, preferring the tiny borgo of Panzano in Chianti, and Alto Adige, which recalls trips to his father’s hometown of Centa S. Nicolò in Trentino. He loves the natural beauty and serenity of each place, how they make him feel “relaxed and at peace.” When in Tuscany, Sadler is happy to be near the Enoteca Pinchiorri, the famed Florentine restaurant that is a frequent destination of wealthy gourmets. “Sure, you spend €250 per person, but you leave happy. It’s like buying an Armani suit. It’s incredibly expensive, but it makes you feel good.”

— Fish must have its natural colors intact, chromatic reflections should not be dulled. Stay away from uniformly colored specimens.

— Eyes must be bright and life-like.

— Fish should be slippery, never dry. It must have its natural mucus coating, fins should not be dry and brittle, most webbing should be intact.

— Fish should not smell strongly, mostly a salty sea scent.

— Flesh should be firm and resistant to the touch.

About the Author: Sheryle Tamagini