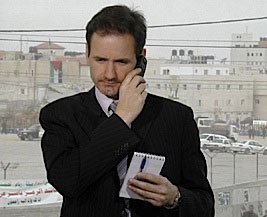 Claudio Pagliara, Rai Uno’s Israel correspondent, says he’s “absolutely in love with Israel.” The Frosione native, who holds a degree in linguistic philosophy from Rome’s La Sapienza University, arrived in Israel in 2003 and immediately went to work learning Hebrew. He was previously foreign desk chief at Tg2 — Italy’s second state channel — for seven years. “That experience allowed me to understand the intricacies of the conflict,” he says. His greatest challenge, he adds, is reporting without being influence unduly by the ample prejudices that move political debate in the region. Pagliara spoke to Amy K. Rosenthal at his favorite Italian café, Il Paradiso, in Jerusalem — which he calls his adopted mensa.

How do you differentiate yourself vis-à-vis other Italian correspondents?

Not an easy question to answer. I play a lot of attention to language, which is extremely important. Words can become politically loaded. I try to avoid propaganda and describe things in my own words, instead of how Palestinians and Israelis describe each other. This language shift is subtle — for example how do you explain a terror attack? What do you consider terrorism and what don’t you consider terrorism? Journalists should seriously think about they mean because it’s not so easy to find lucid definitions.

What’s your definition of terrorism?

My short definition of terrorism is the following: an act of violence against civilians, which aims to kill civilians.

It is important to learn Hebrew and Arabic to follow this crisis. I plan to study Arabic in the future as well but for the moment it’s “step by step.” Language is vital to understanding not only a culture and its people. I’m convinced that the connection between culture and language is essential in order to understand any country.

What strikes you most about Israel?

The high-intensity energy. The country is very young — the average age of an Israeli is 32 — and that Israelis are very proud of their nation.

And about the Palestinians?

One of the main misconceptions about the Palestinians is the usage of the word “Intifada.” Intifada means “a popular uprising,” but in reality the first Intifada was popular and the second was not. There are groups that took control of the Palestinians in a damaging way. They implemented terrorist attacks and hurt the Palestinian cause. The majority of Palestinians don’t support violence.

Why do you think Hamas won in January?

Because Fatah lost legitimacy as a result of corruption. That’s the first point. The second is that radical Islam in the Middle East is growing. It’s well organized in the Palestinian territories. For example, the Islamic schools of Hamas in the Palestinian territories are better than most high schools in Italy. They have double the hours of English instruction than other schools in the territories and they have special classes for internet and computers. It’s a very advanced school. Hamas is really a combination of radical Islam and modern technology.

Israel is perceived as a dangerous country to most Italians. Do you ever feel afraid or in danger here?

No. I think that anyone who comes to Israel to visit gets over their fear within a couple of hours.

As you work in media, do you think that the media perpetuates the idea that Israel is a dangerous place?

I don’t feel guilty for the pictures and images that Israel has abroad. Of course, terror is a reality here, but while they aren’t succeeding in terrifying people inside Israel they are getting results by terrifying people abroad.

Is there a lesson to be learned from Israel in connection with fighting terrorism?

Terror doesn’t give up if you give up. No compromise with terrorists should be made because terrorists are not people who want to compromise. The ultimate goal of terror driven by religious motivations is to destroy a certain kind of civilization.

Is the Iran threat deeply felt in Israel?

Yes. It’s hard to speak to someone in Israel who is optimistic regarding Iran. Iran’s ambition to obtain nuclear weapons and Iranian President Mahmoud Ahmadinejad’s comments that “Israel should be wiped off the map” or “that the Holocaust never happened” creates a sense of uncertainty about the future among Israelis.

Are people optimistic that the Israeli-Palestinian conflict will be resolved anytime soon?

No. Neither the Palestinians nor the Israelis. No one believes that there will be a comprehensive peace agreement in the near future. There lack of trust on both sides makes it difficult to foresee any solution anytime soon.

I think he’s a very good politician, but he lacks Ariel Sharon’s charisma. That said there are two main tasks ahead for Olmert. First, he must gain the support of the international community and second, he must gain support inside Israel where the country is currently under threat by both Hamas and Iran.

Are there similarities between Israel and Italy?

On a human level, I think Israelis and Italians are very similar in their warmness and easygoing nature. In Israel, there is an increasing interest and love for Italy, which never ceases to amaze me. Israelis love Italian coffee and food and you see this reflected in the menus of almost every restaurant and café throughout the country.

— Amy K. Rosenthal is a journalist for the Italian newspaper Il Foglio.