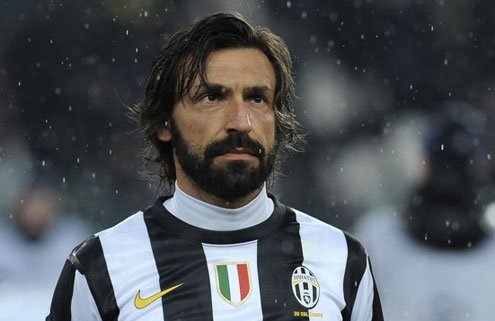 wo summers ago, the curtain threatened to fall on the illustrious career of Andrea Pirlo. Or at least that’s how it seemed when the midfield maestro from Lombardy was told by AC Milan coach Massimiliano Allegri that he could leave the club after a tenth season — one in which Pirlo was often left to watch from the sidelines as the Rossoneri clinched their first Serie A title in seven years.

In an interview with La Gazzetta dello Sport, Pirlo cited tactical reasons for his departure:

“Milan offered me a one-year extension but I wanted three years because I was younger than the other players whose contracts were expiring. But the real reason … was because Allegri wanted to use (Massimo) Ambrosini and (Mark) van Bommel in front of the defense.”

They say that hindsight is a wonderful thing, but contrasting Pirlo’s last two seasons with those of his two alleged “replacements” makes for an almost comical exercise, unless, of course, you’re

Not only did Pirlo go on to captain Milan’s bitter rivals Juventus to two consecutive league titles, he has also been instrumental to Italy’s recent resurgence on the international stage.

Perhaps it is no coincidence that Pirlo could play only 34 minutes of the Azzurri’s hapless World Cup campaign in South Africa 2010, or that his late introduction in the group-stage defeat to Slovakia provoked a late surge by the Italians. In Euro 2012, however, he was rightly revered across Italy for leading his country, against the odds, to the final in Kiev.

When considering who is the world’s greatest current footballer of those born in the 1970s, it’s difficult to look beyond Pirlo — even after undertaking the tricky task of ranking him against players in different positions, such as Gianluigi Buffon and Julio Cesar in goal, Javier Zanetti and Carles Puyol in defense, Didier Drogba and Diego Forlan in attack, and other midfielders such as Frank Lampard. He is undoubtedly the finest playmaker of that vintage.

But Pirlo started out as an attacking midfielder before Brescia manager Carlo Mazzone decided to deploy him just in front of the defense in the hope that he would execute passes such as this phenomenal assist to Roberto Baggio in 2001 .

Another of Pirlo’s key assets is that he is just as devastating from dead ball situations as he is in open play. Nor is not afraid to come up with the goods when they matter most. Free kicks against Liverpool in the 2007 Champions League final, Croatia in Euro 2012, and penalties against France in Euro 2008 and the 2006 World Cup final all come to mind.

A natural born winner, Pirlo has maintained his high standards during the June Confederations Cup in Brazil — and not only through a magnificent free kick against Mexico, in what was his 100th cap for the Azzurri. In the following match, with his side two goals down against Japan, his pinpoint corner found the head of Daniele De Rossi, the turning point in a match Italy would win.

At this point, it might be worth sparing a thought for Ambrosini and Van Bommel. The former is a free agent this summer following his release from Milan, while the latter has hung up his boots after a trophyless season with PSV Eindhoven. Barring an injury or minor miracle, Pirlo will continue to be the lynchpin of a Juventus side, who look set to dominate Serie A for years to come.

Neither Mazzone nor Allegri, a decade later, may have expected their respective tactical decisions

concerning Pirlo would have produced such a deep impact on his career and on Italian football. After 12 years of making the “deep-lying playmaker” position his own, Pirlo has convinced all his managers for clubs and country, Allegri aside, to essentially build the team around him. Very few players can claim such tactical importance throughout their careers and for this reason Pirlo deserves to be considered one of the all-time greats.

Unsurprisingly then, Pirlo is at the heart of my Fantasy Eleven of 70s-born players, who still play the game today, back to front (Eric Abidal’s retirement and Ashley Cole’s 1980 birthday means I’ve had to play Puyol at right-back and shift Zanetti over to the left, where he’s still more than capable):