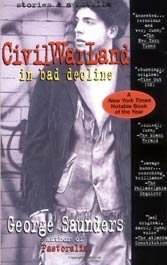 George Saunders’ 1996 debut collection showed that a geophysical engineer — Sauders’ daily vocation — could double as a soothsayer. His darkly wacky fiction shot so far ahead of the curve that the curve has yet to catch up. His five stories and novella massaged the messy entrails of techno-modern life and condensed them into a militia-like porridge. His grotesque and funny sketches of a world gone crazy are in the visual tradition of British print satirist William Hogarth while verbally indebted to Kurt Vonnegut.

Saunders’ gift is in the way he twists the obvious. He makes America sing weirdly by straining the membranes of existing values well past the breaking point. He’s a mad scientist at home in allegorical theme parks. The title story’s narrator is a “Verisimilitude Inspector” at CivilWar Land, which reconstructs the 1860s. Ghosts and gangs create cash flow problems until Samuel the Rectifier, a Vietnam vet eager to help with the bottom line, starts terminating all in sight. In “The Wavemaker Falters,” yet another theme park employee kills a boy visiting a simulated Spanish trout street by mishandling a manufactured wave, an eccentric premise that Sauders’ loony, juxtaposing language supports — “The moon comes up over Delectable Videos like a fat man withdrawing himself from a lake.” Then there’s the fake raccoon relocation farm that’s really a raccoon Dachau (“The 400-Pound CEO”) and the stressed out maker of “personal interactive holography” who steals memories and learns to edit out mastectomies and midlife crises to increase interest in his package (“Offloading for Mrs. Schwartz”).

“Bounty,” the novella, starts by dividing a post-apocalyptic United States between enslaved Flaweds and carpetbagger Normals and then follows the comic peregrinations of a cloven-foot theme park employee (again) as he tries to “save” his vestigial-tailed prostitute sister after she’s eloped with a Utah antiseptic swab tycoon (yes). It’s a world of mutagenic wells, Mobile Embalmers, teen militias, supermarkets-become-brothels, and GlamourDivans hauled up canals by humans, the new surrogate mules, also known as “entrepreneurs of the physical” — junkyard lunacy Saunders wilfully situates in a politically correct noir state with a government sound system that blares “Homogeneity, Sweet Homogeneity.”

Saunders possesses the kind of zany zest that any indecent future with a chip on its shoulders and Satanic intentions might look to for inspiration.