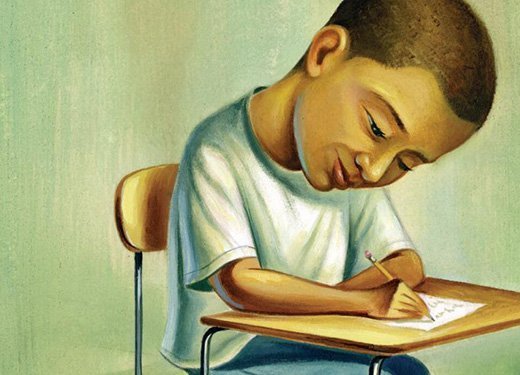 Standardized tests (and punishment) lead kids to a place that will mar their adult life.
N

o sooner had I ranted about the perils of standardized tests and how over-managed kids were losing time to play than in came an email from a friend in the United States telling me about a lovely project she’d started with her granddaughter, nine-year-old Cleo. Both grandmother and granddaughter would share their dreams and write them down together in their own little dream book. The project was interrupted — of all reasons — because fourth-grader Cleo had too much homework!

I sent my friend a link to Michael Moore’s 2015 documentary “Where to Invade Next,” which has a segment praising Finnish education — there is no homework in Finnish elementary school. I also revived my rant about standardized testing and other institutional follies. She replied with a to an initiative from Massachusetts called “FairTest,” which publishes a list of universities that give little or no importance to SAT-like standardized test scores. It also gives advice to individuals and schools on how to opt out of such tests.

To my mind, America has fostered a hostile climate toward children that’s now spreading globally. That’s why the dream project seemed like such a sweet reprieve.

As I’ve pointed out before the most important ingredient of childhood is happiness, a view shared by teachers interviewed in Moore’s documentary (Moore himself doesn’t mince words: “In the United States, education is a business.”)

Many parents are fixated on scholastic achievement, a concern that’s often more about status and class than broader educational goals. At the same time, parents are understandably focused on their children learning skills they’ll need to succeed in further schooling, and to navigate adulthood.

It’s not surprising that parents are ignorant of the psychology of learning and the toll it can take. What is surprising, if not a matter of professional malpractice, is that some teachers are uninformed about these issues.

Bad feelings — frustration, disappointment, undue stress — impede learning. This is true from the first months of life. Infants in general are highly adept at learning, but not when they’re upset or crying. They learn best when they’re happy. In that tranquil state, they don’t need endless repetition or even attempts to teach them. They learn by jumping to conclusions that make sense. This goes for all of us.

Unfortunately, a common (and ignorant) teacher response is to punish a child for his failure, adding to the unhappiness. Privileges are withdrawn. Kids may be made to copy endless lines of tedious text, or continue doing math problems when their friends are at recess. This, of course, is counterproductive. Then, when this doesn’t work, rather than question their methods, stubborn teachers intensify their efforts, with punishment at the center of everything.

It makes me think of “The March of Folly,” a 1984 book by historian Barbara Tuchman in which she used a variety of historical events to illustrate how those in power — many neither ignorant nor stupid — insisted on, and persisted in, courses of political or military action sure to lead to their own demise.

Consider the Vietnam War, set in motion by Ivy League minds, the self-indulgence of popes before the Protestant Reformation, and King George III, persisting in trying to subdue the American colonies rather than win them back.

Many teachers, of course, aren’t like this, but they can be pressured by their schools to teach in such a way. American schools lose funding if their students don’t pass the tests.

I have another friend who teaches in a poor area of San Francisco. Many of her kids are not native English speakers. Some come from disruptive or abusive families. Some receive no help from their overworked parents, many of whom also speak no English. Her school, which badly needed more funds, got less. The teachers were under pressure to get the kids to pass the tests, or they wouldn’t have been able to teach them at all.

Finland is another story. The country overhauled its school system, significantly raising teacher salaries, so much so that teaching jobs are hard to find. Many have PhDs.

In addition to no homework, students have no tests in elementary school. Homework comes in high school, but as one student told Moore, “We get about 10 minutes, but I never do it.”

The teachers interviewed agreed their goal was to ensure that their kids are happy.

Repetition is not what makes us learn. It’s understanding. Repetition may hone a skill, but learning is about understanding, which doesn’t come from endless repetition.

Understanding, surprisingly, comes from play, manipulation of objects, and trying to solve problems that lead to an interesting solution — all this in the context of pleasure, and with adults available and willing to supervise and give hints, to provide support without pushing.

I hope Cleo will get time to continue her project with her grandma. I hope she’ll be able to hang out with friends and play. I hope that for all kids.