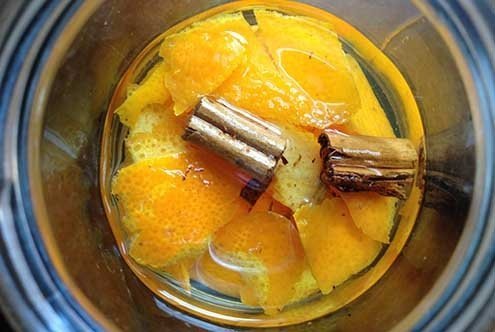 Arancello needs months to "simmer" into drinkable form.
I

t might be because I’m half-Sicilian, but I’ve always been fascinated by citrus. As a child, I remember marveling at the fresh sliced lemons my grandmother served when I spent holidays in Messina. I must have been four or five at the time and had no idea you could actually eat lemons.

But oh what lemons! Nothing like those hard and sour ovals “exported” to Umbria and used almost exclusively for cooking. My grandmother’s lemons were sweet and refreshing, with fragrant skin and edible pith. This Sicilian exposure to pure “lemon-ness” would haunt me afterwards, since it’s rarely reproduced outside south Italy.

In Umbria, even oranges were rare and precious until recently.

According to my Umbrian grandmother, a farmer born in the early 1900s, children sometimes got oranges for Christmas. Just to be clear, the oranges were their only gift, maybe together with a few nuts and dried figs.

But it was a very special gift, since the citrus had to travel hundreds of miles from Sicily to reach the mountains of rural central Italy. Their presence was a small miracle.

Though citrus would become plentiful enough in the years to come, there was still nothing like my uncle Armando bringing back a few crates of mandarins from his Sicilian visits. He was saluted like a hero.

Nowadays our markets overflow with citrus of all kinds. But I’m stlill partial to Sicily. Luckily, I know a small farmer near Ragusa who sends me organic oranges the same day they’re harvested. Two days layer, when the shipment arrives, I go into an orange-induced frenzy. I make cakes, marinades, salads, jam and candied peel.

My family gorges on juice, of course, but before anyone can squeeze the fruits, I hurriedly harvest the peel for infusions. I use a potato peeler and make a small mountain of glowing orange strips, all still freshly soaked full of aromatic oils.

I freeze parts of the peels to use later in the year when only imported (and flavorless) oranges are available.

The rest of the peel I toss into alcohol for a couple of weeks to make an orange liqueur called arancello. I prepare large quantities so I can age it from six months to a year. If you’re patient enough, the liquid becomes mellow and tangy, a perfect warming treat for a cold winter evening. It’s like a bit of sun in a glass.

— Peel the oranges and lemons making sure to remove only the zest. Transfer the zest in a jar, add alcohol and spices, close and keep in a cool dark place for two weeks. After two weeks, filter and discard the zest.

— For the sugar syrup, bring the water and sugar to a low boil until the sugar dissolves completely. Cool. Add syrup to the infused alcohol. Transfer the mixture in a bottle. Stopper the bottle and keep in a cool dark place at least two months before using.