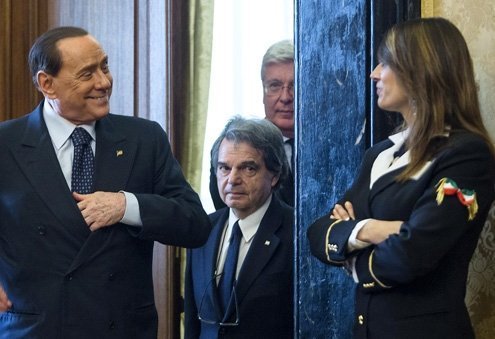 Silvio Berlusconi's "pact" with Italians gradually came to be about saving (and satisfying) his own skin.
D

onald Trump’s campaign for the Republican nomination had barely started when there was a flurry of editorials comparing him to Italy’s former prime minister, Silvio Berlusconi.

Commentators such as Jacob Weisberg and Beppe Severgnini noted that the similarities went beyond the womanizing and unnatural hair. Berlusconi and Trump both said their business acumen would make their countries work again, that they were political outsiders untainted by entrenched systems and that they were the plainspoken mouthpieces of the silent majority.

Most commentators stopped there, failing to mention that Italy’s recent history offers other useful comparisons. The first is the similarity in mood between today’s United States and Italy in 1994 when Berlusconi entered politics. In Italy then, just as in the U.S. now, voters were angry about a political system they saw as blocked and that seemed to have rigged the game in its favor.

Two forms of change entice angry voters — and not just in the U.S. and Italy: The ascent of a strong authoritarian leader who will cut the Gordian knot or a rise of a radical political wave that will clean the Augean stables.

Before Berlusconi, Mussolini sold himself as Italian “strong man” who could make “Italy’s trains run on time.” Voters who now yearn for the kind of order Mussolini brought to Italian political chaos (underwritten by shameless violence) or an antidote to the mushy, Scandinavian-style “socialism” of American liberalism might be surprised to learn that Mussolini was a socialist in name and fact.

Once in power, he intervened heavily in the Italian economy, creating a welfare state that included a national health system, workmen’s compensation and a pension system, as well as numerous utopian work-creation projects. He nationalized large swathes of the Italian economy, lumping banks and companies into Soviet-style combines that employed hundreds of thousands of people and produced everything from pastry to ships.

Despite numerous attempts since the 1980s to privatize these inefficient machines of patronage, Italy’s economy is still hobbled by an unsavory relationship between business and politics inherited from Mussolini. The troubled airline Alitalia is still on the government books. So is 30 percent of petrochemical giant Eni.

Berlusconi’s strongman regime was supposed to make the Italian economy efficient and reduce its millstone bureaucracy. Once in office though, Berlusconi’s main focus was on creating legislation that would block his conviction on charges of corruption and Mafia association.

Supporters of Trump and Democrat Bernie Sanders, who both present themselves as outliers who will shake up the political establishment, would be wise to check out Italy’s experience with grassroots movements that promised radical change.

When the separatist Northern League (Lega Nord) burst on the scene in the 1990s, many Italians assumed it was too regional and extreme to go anywhere. Its supporters thought it could transplant the hardworking ethos of Italy’s northeast to the country’s underperforming south and its “corrupt” capital in Rome. Instead, when the Lega arrived in Rome it soon joined the gravy train enjoyed by the parties it had sworn to displace.

It became an irritating minority that supported Berlusconi, insisted on its cut of patronage spoils, and bedeviled badly needed efforts to reform to Italy’s fractious proportional electoral system.

More recently, the 5-Star Movement (Movimento 5 Stelle) founded by comedian Beppe Grillo promised to transform Italian politics and society with direct democracy via the Internet. When this odd mix of youthful mavericks, leftovers of Italy’s former Communist party, and the generally disgruntled entered the legislature in 2013, its refusal to work with standing lawmakers shut down government for months. Now it appears it has at least as many members under legal investigation as those belonging to the established political parties it intended to supplant.

That’s not to say that political clout will send Trump or Sanders down the road to perdition. But Italy’s experience does suggest that the qualities that fire up voters are not the same as the ones needed to govern or cooperate with parts of “the system” the establishment-busters do not control. It also suggests that it’s hard to resist the temptations that make incumbents hate to hand over power.

Both strongman and radical movements claim they’ll blast away the efficiencies and rot of politics as usual. These claims are not only unrealistic but also un-democratic, based on subliminal threats of violence. They suggest dictatorship by a person or dictatorship by the people.

As for politics as usual, in 2016 that means Hillary Clinton. Italy has been there and done that too. The political machine and expectations of dynastic succession that critics begrudge Clinton are reminiscent of the unwholesome connections that brought down Italy’s first republic in 1992, when four decades of post-war politics as usual collapsed under the political party financing scandals known as Tangentopoli.

These scandals opened the void that coaxed Berlusconi into the political spotlight, which brings us right back to where we started.