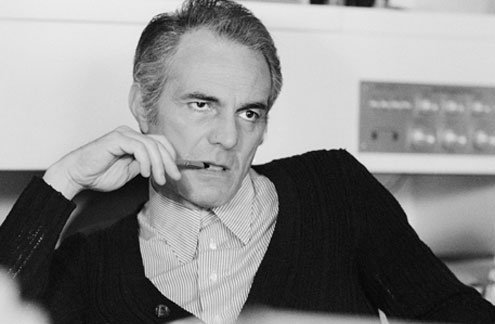 Agenore Incrocci (1919-2005): he and his partner Furio Scarpelli were prolific screenwriters.
I

n 1965, director Alfred Hitchcock asked Italian screenwriting duo Agenore Incrocci and Furio Scarpelli, better known as Age & Scarpelli, to devise a script based on an idea that had first struck him in the 1930s, “a murder movie with overtones of comedy” about a Sicilian immigrant who rises to become the manager of an opulent New York hotel. The manager then sends for his family, employs them in the hotel, but soon learns they’re eyeing an expensive coin collection that belongs to a hotel guest.

The film was to be called R.R.R.R. “Numismatists mark coins by the letter R. R, RR, RRR, RRRR,” explained Hitchcock, with four R’s representing top value. He imagined “a superwoman like Sophia Loren” as one of his stars.

Hitchcock directed 50 films during his in his illustrious 55-year career, but R.R.R.R. wasn’t among them. He flew Age & Scarpelli to Hollywood where initial conversations about the project went well. But once they returned to Rome and began work on the script, Hitchcock blinked. “I dropped the project because it seemed to be shapeless,” he later told French director Francois Truffaut. Italians, he added, “are very slipshod in matters of story construction. They just ramble on.”

In curtailing the project, Hitchcock also cited language barrier problems, which no doubt were real. But the “slipshod” dig strongly hinted at Hitchcock’s own frustration in trying to adapt to changing currents in contemporary cinema.

Hitchcock had sought out the Italian duo based on his admiration for I Soliti Ignoti (“Big Deal on Madonna Street”), a1958 crime caper comedy considered a masterpiece of Italian cinema.

At the same time, European filmmaking was also on the rise, leading the British-born Hitchcock to hope that Age & Scarpelli might somehow help revive his sagging career, at risk after the 1964 “Marnie” fell well short of expectations.

According to one biographer, Donald Spoto, Michelangelo Antonioni’s 1966 Academy Award-nominated “Blow-Up” left Hitchcock stunned. He told screenwriter Howard Fast: “These Italian directors are a century ahead of me in terms of technique! What have I been doing all this time?”

He was also drawn to neo-realism, Italy’s gritty and groundbreaking postwar film movement and in particular to director Vittorio de Sica’s Ladri di Biciclette (“Bicycle Thieves”) and the skills of his longtime screenwriting partner Cesare Zavattini. “Zavattini and De Sica were using the opposite of Hitchcock’s condensed approach to story,” wrote Irish director and critic Mark Cousins. “They expanded their narratives to create space within them.” Despite stylistic differences, Hitchcock praised “Bicycle Thieves” as a quintessential “chase film.”

While working with Age & Scarpelli on R.R.R.R. idea, he also put out a feeler to Zavattini. Another biographer, Steven DeRosa, suggests Hitchcock’s assistant asked how much Zavattini might want to write a treatment and screenplay for “a dramatic idea something along the lines of… ‘Notorious’.”

Zavattini’s asking price, eight million lire for the treatment and 30 million lire for the screenplay (about $13,000 and $48,000, respectively), was a steal by Hollywood standards. Though immersed in writing De Sica’s Un monde nouveau (“A New World”), Zavattini was flattered by Hitchcock’s interest and agreed to make time to work with him.

But Hitchcock pulled back yet again. “This postponement is due to the fact that Mr. Hitchcock does not feel he should have two Italian writers [Age & Scarpelli considered as one] working on story outlines at such a great distance from here and at the same time,” wrote his assistant by way of explanation.

Hitchcock apparently liked the closed-door contact between writer and director, something that emerges in DeRosa’s book about the correspondence between Hitchcock and fellow writer John Michael Hayes. “The most enjoyable part of making a picture is in that little office, with the writer, when we are discussing the story-lines and what we’re going to put on the screen,” Hitchcock confessed. Moreover, he could monitor the creative process. “The big difference is that I do not let the writer go off on his own and just write a script that I will interpret.”

With Hitchcock in Hollywood and his collaborating writers in Rome, what DeRosa dubbed Hitchcock’s “Italian connection” promptly fizzled out. So too did the reception of his next film, the 1966 political thriller “Torn Curtain,” which was plagued by numerous disputes over the script and extensive re-writes.

As for “ramble on” Age & Scarpelli, they emerged unscathed. A year after the Hitchcock misfire, the duo wrote Sergio Leone’s “The Good, the Bad and the Ugly,” the second installment in a troika of spaghetti Westerns that met with international success.