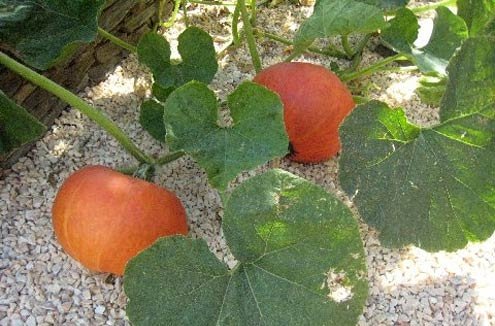 What had been a weed-choked acre with neglected fruit trees and vines was cleared, spaded, mulched and planted with raspberries, tomatoes and grapes. Photos by Suzanne Dunaway.
S

ometimes I think that when I write about gardens, I must be nuts. So many of us live in small apartments sans terrace where the best we can do is put pot of basil on a sunny window ledge. But many European families have second homes, if only for investment purposes, and many of them are located are outside the city with spaces for growing a few well-chosen edibles. It all depends on what you make of it.

Last spring, the fallow land next door to our little house in France was invaded by friends of the owner and turned into a Garden of Eden overnight. What had been a weed-choked acre with neglected fruit trees and vines was cleared, spaded, mulched and planted with raspberries, tomatoes, grapes, salad of all kinds, and potirons, lovely equivalents of American pumpkins.

A wandering merle or sparrow or one of the many little winged beasts around here evidently visited my compost pile, near the enclosure between the gardens, and dropped a seed that generated vines and large elephant-ear-sized leaves, which began feeding the lovely, yellow trumpet-shaped flours that eventually became orange Cinderella pumpkins. They seemed to bask and expand on the sun-warmed gravel spread between my growing beds, and there they will stay until October when the witches come out. I would never have thought that the soil of my tiny garden could accommodate such rampant glory, and now I’ve learned that I, too, can plant among the stones.

In another part of the compost leavings, I stuck a few seeds of a simple climbing squash I’d had in Los Angeles, the fruit of which grows into long, goose-necked shapes that are almost too beautiful to pick. And they were big, some of them three-to-five feet long. In this odd French soil, they appeared not to grow at all but only began covering part of my dark green fence that divides my garden from the neighbors’ bounty.

But a few days ago, I noticed a sudden plethora of strange long, straight chartreuse-colored shapes hanging in from the vines. They are otherworldly, like what might be found in a moon-man’s garden or the result of some very serious genetic crossbreeding. Just since yesterday, one has grown about 10 inches longer: Same seeds, different terroir.

Wandering through the rest of my tiny patch, I came upon a vine that had crept up from my other neighbor’s garden below – an acre of asparagus, tomatoes, squash, cucumbers, lemons, oranges, limes, kumquats, grapes from the vines of his great-great-grandfather and an arbor hung with kiwis. The vine on my fence was obscured by tomato plants, which, when pushed aside, revealed the intruding vine curling about my fence and hung with its own kiwis pirated from below. Never have I had kiwis, not even in sunny anything-grows California, but there they were, ripening for fall when the New Zealand jewels go off the market.

I thought it was empty, this delightful treasure chest of surprises, but just a few days ago while fondling my ronds de Nice (a round, succulent French variety of green-striped squash) and lovingly pinching my basil flowers to encourage more growth for the rest of summer’s pesto, what did I see nestled under the leaves of the hearty spigarello plant (a hearty, broccoli-related vegetable whose leaves are delicious when chopped and crisped in olive oil with crumbled hot pepper and slices of garlic), but an oddly familiar jet black and white shape sprouting beneath my Italian greens.

What on earth (no pun intended) would be lurking under vegetable leaves?

In fact, a small Tuxedo cat with green eyes like the ronds de Nice who allowed me, after two more days under the spigarello and several dishes of tuna, to lure her to the kitchen and thus our household, cat-less for 15 wistful years. Welcome, Lou Lou.

Gardens are magical places. You never know what might be flourishing under that proverbial cabbage leaf, whether it’s a rare flower, an unusual vegetable, or a pretty baby that doesn’t need diapers.