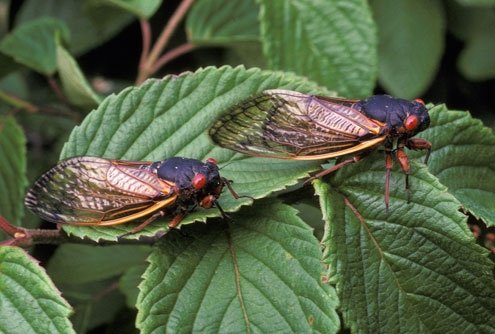 Will you sleep with me?
T

he show of the season is coming to New York and its cast of millions is a two-inch-long insect. Cicadas are emerging from the ground after 17 years and the city is abuzz.

Spectacular exhibits at the American Museum of Natural History rarely create as much excitement. Citizen scientists from Staten Island to the Bronx are building underground sensors and tracking the swarm. Musicians are creating duets to accompany the din. Chefs are designing menus based on ancient Chinese recipes that claim female cicadas taste the best. And no event would be complete without bloggers blogging. Many have decided to call the awakening “Swarmageddon,” the going suffix in the jargon of all things big.

It also helps that the cicadas emerge from years suckling at the roots of trees for one reason only: to have sex. Who doesn’t find sex interesting?

The nymphs surface when the soil is 64 degrees (18C) and slowly begin climbing the closest tree. A week after emerging, they molt, and the males begin their mating call. The females drum their wings in reply and they bond in cicada love.

For me, hearing the cicada is simply the call of a long lost childhood friend.

In Ohio, the “dog-day” cicada was the annual harbinger of summer, arriving in July and August and the trees were alive with the sound. I spent my summer days outside, barefoot and exploring. On tree bark, cicada shells clung brown and translucent like tiny monsters. I would examine them closely, amazed that the creature once inside now rattled in the trees. When I gathered the courage to touch one, it fell into my tiny hands before I tossed it, frightened, into the tall grass.

Nature has ways of teaching humans that they’re not alone, but instead one piece in a maze of living things. In my childhood summers, the cicadas arrived with beetles and centipedes, raccoons and opossums, owls and turtledoves. They all shared space with me as I learned about the world.

In the middle of New York City, such companionship is not so easy to come by. Nature arrives in rain and snow, subway rats and Central Park squirrels. Migrating birds make a stop, only to fly off to better feeding grounds.

The 17-year cicada is only an event because New York’s landscaped parks can’t replace more natural nature. When creatures arrive mysteriously with a timetable of their own, when they burrow and crawl and fly and sing, and mate en masse, we take notice.

Do they make us yearn for a wildness we’ve lost or for a sense of nature we’ve become disconnected from? I sometimes wonder. Maybe citizen scientists have an answer, and if not, surely a blogger will tell us in a post, or maybe millions of them, like the cicadas.