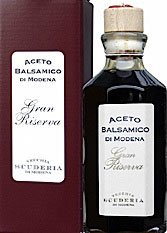 Only Modena for vinegar.
E

ver since I started writing the column Pane al Vino in 2004, it seems like I’ve always had a few column ideas bouncing around in my head. Some lost their appeal over time, and some of them developed into full-fledged columns that readers have over the months seen in print on these pages.

And then there are some that did neither — remaining nascent seeds of ideas that would neither shrivel away nor bloom into something worth discussing for a full column.

For reasons I’ll get back to, this month’s column is a great opportunity to briefly visit some of these ideas, in what amounts to a series of mini-columns. So here’s to cleaning out the cupboard of column ideas and random thoughts I’ve been cultivating lately.

Balsamic vinegar: If you’ve ever had real balsamic vinegar, the watery liquid in bottles on supermarket shelves just won’t do. The real stuff — aged for at least a dozen years and sometimes as for long as a hundred — is syrupy in texture, very dark in color, and it can cost a small fortune. But what a taste! Layers of flavor that are somehow sweet and sour at the same time: the tang from a single drop will linger in the mouth for minutes. Balsamic vinegar differs from other vinegars in part because it starts out as unfermented grape pulp rather than wine or fruit juice, but the real magic happens in the barrel as the juice ages and each year seems to add another layer of complexity. To make sure you are getting the good stuff, look for the words “Aceto Balsamico Tradizionale” — from either Modena or Reggio Emilia, two villages northwest of Bologna. But if one of these pricy bottles is out of your price range, here’s a trick I learned from a chef friend that many restaurants use to improve less expensive vinegar: melt one teaspoon of dark brown sugar into a cup of cheap Balsamic. If it’s used for cooking, the result — while not the same as a 40-year-old bottle of real Balsamic — is much better than the €5 bottle you innocently brought home from the store.

Twist top caps: No poet ever waxed lyrical about a cool night in front of the fire place, a twinkle in a partner’s eyes, and then twisting off the cool aluminum top off a bottle of wine — but it’s bound to happen eventually. At the Vinitaly wine fair I found a small handful of Italian producers who are trying out the metal closures. I hope more will try it over the coming years. A tradition-bound wine producing country like Italy will always be slow to adopt new things. But on a trip to New Zealand last year (where these modern enclosures are embraced) I learned the delight of a wine that was fruity and fresh and clean every time. Though I think only one bottle in 50 is truly ruined by cork seals, probably a dozen more are subtly affected by contamination coming from the organic cork material. Add to the fact that metal tops are cheaper, they never deteriorate, and can be opened without special tools, and it seems a matter of time until they become wide spread, even in the Bel Paese.

Carbonara sauce: The origins of this delicious Roman pasta sauce are a delightful mystery. There are several variations of the recipe, but they all include eggs, black pepper, pig’s jowl, and pecorino cheese — less certain is when and where it was invented. The name comes from the word carbone (Italian for coal), which leads many people to speculate that it was popular among charcoal makers or coal miners or that the correct variation features pancetta or guanciale — the jowl — that’s been cooked to a charcoal-like crisp over an open fire. Others say it was originally a dish enjoyed by the Carabinieri. But the most likely story is that it was invented to satisfy U.S. troops stationed in Italy after World War II, combining the bacon and eggs of the traditional American breakfast with Italy’s own spaghetti — an argument backed up by the fact that the recipe doesn’t appear in any pre-war cook books. Whatever the origin, it’s now a simple classic of Italian cuisine, perfect for the first cool days of September as summer sputters to an end.

And so the cupboard is bare, which is appropriate as this is the final edition of Pane al Vino. Although 20 columns over the last couple of years have been fun and challenging, a writer’s circumstances and priorities change over time. My sincerest of thanks to everyone who has written in with a question, comment, or a note of support, as well as to those who have simply enjoyed these monthly missives of mine. I hope it’s been as fun reading Pane al Vino as it has been writing it.