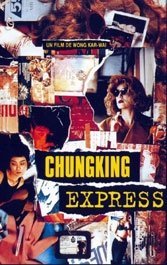 The love lives of policemen went mostly unexamined until 1994’s “Chungking Express.” Drenched in wild color and fluorescence (the trademark of cinematographer Christopher Doyle), this charming early work from director Wong Kar-wai divides itself between two stories of Hong Kong cops who find themselves strung out on the strangeness of modern love.

In the first story, Cop 223, expiration-date obsessed He Qiwu (Takeshi Kaneshiro), has been jilted by his girlfriend. He’s decided to find another woman if he can’t repair the love affair by May 1, his birthday. In the late hours of April 30, he meets an unnamed woman (Brigitte Lin) with sunglasses and a blonde wig at a bar. Her elaborate drug deal has just gone bad, and she’s unamused by Qiwu’s advances. Despite this the two drink until their bodies lean on each other for support.

On the same side of town, Cop 663 (Tony Leung) is buying a chef salad from the local snack bar. His own love woes blind him to the attentions of smitten attendant Faye (the effervescent Faye Wong). Faye starts breaking into his apartment to cheer up the décor, and him: dusting off stuffed animals, replacing old sheets, watering neglected plants, adding brightly to the fish tank. But Cop 663 doesn’t get it. “I’ve begun noticing tiny things,” he tells himself. “Even sardines taste different.” Eventually Cop 663 gets wise to breaking-and-entering Faye, and their coupling ends in ambiguity.

The film’s real beauty is in Wong’s poetic dialogue (“If memory can be tinned, I hope it never has a sell-by date”) and its expert use of song (Dennis Brown’s melancholy reggae jam “Things in Life”, The Mamas and the Papas “California Dreamin'”). As a cornerstone of 1990s cinema, it remains timeless.