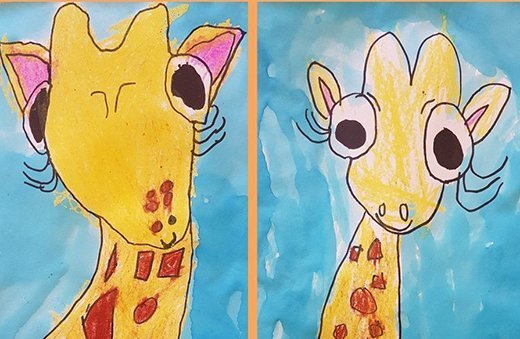 or a large number of early days on the planet I wished only to live in cloud cuckoo land. Even on the outskirts — once, that is, I established that word meant outside the city and not a strange kind of woman’s garment that put pedestrians at risk.

This all began with the news that a giraffe had escaped its smallish garden residence at the zoo and had wandered up toward a nearby boulevard, causing a woman to faint and a policeman to run away. “We are living in cloud cuckoo land,” my father exclaimed after announcing this news. Since he said no more, and I was not allowed to explore his idiosyncratic agitation, I assumed this to be true, so I asked him for confirmation.

To this he replied, “If only,” which made matters far worse. All the more so since he seemed to shake his head in a way that made impossible to understand if we were or were not, thanks to the giraffe, in the wonderful new place.

But since nothing in my life immediately changed, and the giraffe, or so I was told, had been coaxed back into captivity (and the woman had un-fainted), I presumed we really hadn’t gotten there yet.

Which only intensified my desires. I told Sara, who lived next door and was very old (13), of my desire to live in cloud cuckoo land, to which she replied: “You would. Good luck.”

This again seemed to confirm the place indeed existed, and most probably would not include girls, only wayward animals and occasional fainting humans, all wearing obligatory funny hats.

Cloud cuckoo was everywhere around us if only we’d let it in.

In the absence of tangible evidence, in my view entirely overrated, I chose to sketch out just what cloud cuckoo land looked like. I did this quite literally, using crayons, which I knew would grow like corn in that place. I drew huge red mounds and birds with yellow tails and machines that looked vaguely like hot dogs, but with wings. Cloud cuckoo land would also have a monarch, Chump, a name I’d copied from a schoolmate’s notebook. Chump would live in a castle, spelled with a “K,” and ending in “el” (the correct spelling, at least to my mind). The king’s “kastel” would also include mice and minnows, beloved species for my love of the letter “m.”

Since I also could not do without “z,” cloud cuckoo land would feature all manner of brown and purple zebras, written as “zerbas” in the new language of the new land. These zerbas would have the uncanny ability to speak whole human sentences, thus further alarming my father and perhaps provoking him into confirming what, at least in my mind, I knew to be true: that cloud cuckoo was everywhere around us if only we’d let it in.

In cloud cuckoo land there would be no need for school or homework or even education, not with such an abundance of crayons to harvest. The land’s meal of choice would be caramel custard and sugar cookies, both pulled from trees that would then grow new custard and cookies within minutes, keeping every citizen happy.

Cloud cuckoo land would worship a god named Daddy, but never take him too seriously, particularly if he at any time suggested the land he presided over did not exist. In fact, the expression “turn of phrase” would be outlawed, lest anyone try to determine just what the name cloud cuckoo land meant in actual fact, which would also be outlawed.

Cloud cuckoo land would worship a god named Daddy, but never take him too seriously.

In fact-less cloud cuckoo land, or Cloud Cuckoo Land if written on a map, no one would “set things straight” or “make sense of things,” phrases that to cuckoo landers would not make sense. Instead, they’d wake each morning and ask fellow citizens: “Has the giraffe escaped yet?” The answer would always be a resounding “Yes!” — giving King Chump and Daddy another reason to take heart.

This story has a happy ending, by Chump’s decree, and mind.

In the middle of my cloud cuckoo land craving, I watched on television as two men in black and white suits discussed a president’s plan to land a man on the Moon within a decade.

To which the other replied, “Why, it’s pure cloud cuckoo land!”

This exchange confirmed all my wisdom. I merely sat back and awaited the landing, as well the discovery of grazing zerbas, and I have yet to give up hope that day will come.