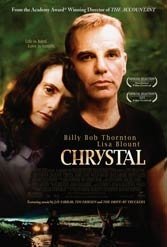 A fair amount falls flat in writer-director Ray McKinnon’s heartfelt Ozark saga of guilt, madness, and redemption. What doesn’t is the performance of Arkansas-born Lisa Blount as Chrystal (also McKinnon’s wife), a mountain girl who endures years of pain for a lost child and is on the wrong side of insanity before a series of improbable circumstances encourage her to right herself.

The setting is the Tennessee backwoods, where Crystal’s husband Joe (Billy Bob Thornton), a convicted marijuana grower, returns humbled after a prisoner term. It was lawlessness and a car wreck that shattered his life, Crystal’s, and that of their long missing child. Now he’s back to make amends, or try, but his rural homeland resents him; drug allegiances have changed. But that’s the backstory.

Up front is Chrystal, crazed, feral, politely desperate, a woman whose infinite sadness has stripped of self-esteem and demoralized her sexuality, long ago spread around to fill grief’s void. Joe’s return helps little. He too is a lost soul who gradually transforms himself into a self-punishing mountain man.

McKinnon’s film is an erratic excursion to another planet, whose banjo music and ethnocentric mores bear little resemblance to any known city life. “Can we get back to America now?” begs an assistant to a visiting music historian chronicling the history of bluegrass. The answer is “no,” since it is that separate America that McKinnon — who plays drug dealer “Snake” — portrays best, with Blount, who died suddenly in 2010, the binding glue of an uneven narrative that nonetheless reflects a worth piece of lost Americana.