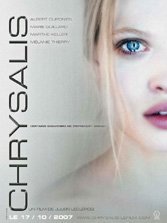 In futuristic sci-fi Paris cast in metallic grey, high-tech surgeon Bruegen (Marthe Keller) and daughter Manon (Melanie Thierry) are in a disfiguring car crash. Meanwhile, a police lieutenant named David Hoffman (Albert Dupontel) gets into a shootout with a shady renegade called Dimitri Nikolov (Alain Figlarz). Nikolov guns down his Hoffman’s partner (who is also his wife) before fleeing. When Hoffman and new partner Marie (Marie Guillard) go after on-the-lam Nikolov they run into Bruegen, whose who, in a ghoulish twist of motherhood, has surgically “rebuilt” Manon. With all this replacement and enhancement, identity is a key issue: That thought that slipped your mind, was it really yours to start with?

A few clichés annoy, Bruegen’s German accent, for example (Nazi comparisons arise) and the classical music that accompanies the virtual surgery. The fight scenes are gracefully choreographed, with an over-the-top nod to John Travolta and “Saturday Night Fever” when the thug pivots. In his debut, director Julien Leclercq has assembled a good cast and sustains the tension well.