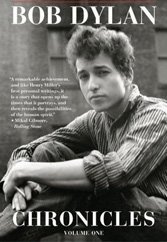 Sliced, diced or dissected to suit the gossipy cravings of rock mavens and learned critics, Dylan’s vintage recollection can run you down Social Science Boulevard.

But don’t go there. Dylan proves a point: he can write. Songwriters are easily lured by conundrum, bad poetry, and snippy phrases more cool than apt. None of that applies to Dylan. He tells a story that happens to be his own and does it well. He crams page after page with generously observed anecdote, wide-eye plundering from the dank city that gave him his early-60s charge. His is a New York City divided equally between loquacious panhandlers and eccentric word-merchants.

Dylan’s ear is big on detail, bless him. Early on, for example, he meets Izzy Young, “proprietor” (not owner) of the Folklore Center. “Young was an old-line folk enthusiast, very sardonic and wore heavy horned-rimmed glasses, spoke in a thick Brooklyn dialect, wore wool slacks, skinny belt and work boots, tie at a careless slant. His voice was like a bulldozer bad always seemed too loud for the little room.”

Dylan pays itemized homage to his influences, with Robert Johnson king: “Johnson is serious, like the scorched Earth. There’s nothing clownish about him or his lyrics. I wanted to be like that, too.” You get Dylan down-and-out, successful, emotionally and sexually irresponsible, and finally uncomfortable with shaman status. Candor? Try this: “I had very little in common with and knew even less about the generation that I was supposed to be the voice of.” His favorite politician: Barry Goldwater. News as fodder for his songs? “Even the current news made me nervous. I like old news better. All the news was bad. It was good that it didn’t have to be in your face every day. Twenty-four-hour news coverage would have been a living hell.”

You think Dylan’s washed up? You never liked him? Fine. Forget the music, ignore the railroad voice. Read instead about a Midwest boy called Zimmerman whose boyhood heroes were Robin Hood and St. George the Dragon Slayer. “I was more of a cowpuncher than a Pied Piper,” he says at one point, and you believe him.