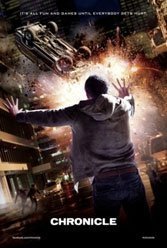 In Josh Trank’s insidiously crafty little film, brooding high school loner Andrew (Dane DeHaan) decides to assert himself by filming his day-to-day with a camcorder (hence the chronicle). His need to escape is understandable. He’s the teen son of an abusive father and a dying mother. His only ally and friend is his more self-assured cousin Matt (Alex Russell). The filming seems innocuous if not ridiculous — it’s high school after all — until Matt and popular big-timer Steve (Michael B. Jordan) stumbles into a mysterious glowing cave, Andrew in tow. The three emerge with connected telekinetic powers, which at first they use for petty mischief.

But Trank and co-writer Matt Landis are less interested in pranks (and there are plenty) than what happens when three teens get powers beyond their wildest dreams, and one of the three, Andrew, is a simmering brew of maladjustment and resentment. The potential for havoc is hinted it, but Trank wisely takes his time getting there, working first to hone the depth of scowling Andrew’s estrangement, and it collides with his sudden celebrity creating a tide of supernatural rage his companions can’t control.

This is “found footage” fiction that has its camcorder roots in the likes of “Blair Witch Project” and “Cloverfield,” but which, silliness aside, makes a case for the dangers of opening any Pandora’s Box, particularly since boys will be boys, these days sometimes raging ones. It’s a cleverly paced cautionary tale about sudden supermen and the perils of erratic adolescence.