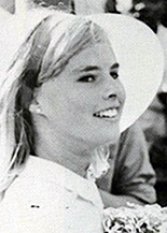 usan Todd’s eyes taught me infatuation at age 16. They were iridescent, unspeakably blue, as if polished nightly by loyal attendants in a luxury hotel. The came charged each day, and new boys fell under a rapturous spell for an hour, a week, longer.

I’m sure she never memorized the devouring faces (mine among them), but the eyes knew when to flutter, when to sparkle, when to focus teasingly on sleek boy-athletes as they rushed out to ritually practice being men. She also befriended the coy, a heartbreaking gift.

Susan Todd was that precociously coy synthesis of American male teen longing, a cheerleader. (“I wonder how long he thinks he can get away with that gallavanting around,” reads the caption under her trophy-bride yearbook photo, her hair wrapped in a band.) The he isn’t named and the word gallivanting is sweetly misspelled.

Times change, language too: In 1968, totally still had adverbial pulse, cool didn’t muscle out “yes,” only a band rocked, and hooking up governed joists and transistors. The year, meanwhile, chafed at consumer capitalism. Rallies against the war in Vietnam regularly drew 250,000. Political renegades Daniel Cohn-Bendit in West Berlin and Angela Davis in California, not Paris Hilton and Beyonce Knowles, were celebrities. My most treasured acquisition was a pair of horned-rim prescription sunglasses I wore day and night as non-conformist proof of life, much to the perplexed chagrin of my brilliant journalist father, who called me “spectral” and scowled for the better part of a harsh winter. In my notebook, I copied from William Blake, “I must create a system, or be enslaved by another man’s.”

Pre-Woodstock skeptics disparaged school sports as surrogate militarism unworthy of those who were experienced in Jimi Hendrix. They heckled the woeful high school football team (I was its statistician) and scorned cheerleaders as testosterone-generated fantasy girls. Even the traditional high school prom went into limbo.

I sympathized with idealistic dissent to a point, but to embrace it fully would darken a movie that starred Susan Todd and her perfumed attentions. So I kept my political views to amateur essays submitted with only modest fortune to the school newspaper.

In 1968, a crush contained an ingredient of lyric privacy that the triumph of chat has since dissolved as unfashionable. Watered-down Bibles and sexually-explicit URLs didn’t figure: The owner of a lonely heart often had only his or her solitude, and the then-admired tenets of self-reliance, for comfort. Now, few teenagers are static-free to fill in romantic blanks, or to make blanks romantic. Imagination has been rented indefinitely by fast-talking fixers who seek to substitute the sentimental sobs of the dark with a rectangular world in which controlled promiscuity has a social value greater than eloquence or charm. The edgy marvels of insecurity and adolescent doubt, like aging, are complications that can be headed off with the proper planning.

My pre-Rome hometown paper, The Washington Post, once an unfashionably stodgy beast, dedicates an ample website section to relationships and dating (including thousands of personal ads) as if every question begged an answer, lest someone become a victim. Last week, for example, one Libby Copeland studies “friend” crushes, distinguishing between “near” ones (in which you know the boy or girl) and “far” ones (you don’t). On such a scale mine for Susan was in the mid-to-near range.

Too often, though, contemporary dating advice reads like Philip Roth taking a stab at writing ad copy for Ikea.

“Unlike the infatuation from afar,” the article explains, “the friend-crush is especially powerful because the romance seems so almost possible. By its very nature, the friend-crush encourages Talmudic dissections of the beloved’s psyche, hashing and rehashing of missed opportunities, optimistic interpretations of neutral behavior.” She quotes a crushee who “wonders now how much of the crush was just him enjoying the chase, the thrill of the unattainable. ‘I think it goes to show (says Copeland’s eloquent victim) that my crush was just building upon itself from me not knowing. It was completely constructed.'”

OK. But try as I do to color in all the events of December 1968, I don’t remember dissections, Talmudic or otherwise (we did cut up a frog, in biology class), or the hashing and rehashing of missed opportunities (there were none). Apart from staring wanly at Susan Todd’s extreme beauty and wondering at its galactic origin, I wasn’t bright enough to interpret her behavior, neutral or otherwise (I did wince when she took the quarterback’s arm and hand, his name was Jim, and locked it under her own, as if it required a protective baking that was hers alone to provide). Couldn’t she see how this insensitive act damaged the morale of her suitors?

The truth is that a jittery 16-year-old boy with fussy sunglasses stood no chance with a 17-year-old blonde cheerleader with aquatic blue eyes. Nor were there rationalizing articles that began (as another on the Post‘s site does, this one about college freshmen): “Any poor schlub can take a woman to a swanky restaurant and slap down his credit card. If you really want to impress a woman, you should cook for her.” Or this one, “What becomes a man least? Young women’s ‘deal-breakers’ include cheap dates, hairy backs and baggy sweatpants.” What’s sad about this is the sexual uniformity: Increasingly, male vulgarity is metabolized into female lore.

Yet as I examine my circumstances these many Decembers later, Susan Todd did well to see past me. I skirted swanky restaurants until my late 20s, had no credit card until 31, and never learned to cook in a literate way. Perhaps I even have a hairy back, though I’ve never been properly vetted. Susan Todd doubtless married the quarterback, or someone like him, and probably now has three children, two of them (I speculate) late adolescent girls as stunning as their mother. They deal with boys whose baggy sweatpants place them in line to become credit-card schlubs (why, I wonder, make boys sound like worms or roots?)

Stay single long enough and myth makes itself at home in the past — in part to cauterize the present. History is embellished. Pauper are remembered as kings, cheerleaders as princesses.

Is Susan Todd real? You decide. But first read on.

I was recently asked by a friend to advise her lovely teenaged daughter who couldn’t summon the courage to approach a attractive but elusive boy. Confused, smitten desperate for signs, she plied me for advice. She reminded me of what I couldn’t have known in 1968, smitten by eyes: That it’s hard being a girl among confused boys, and hard also being a confident girl among pretend-confident boys. Perfume fixes nothing, nor do credit cards. Now as then, most intimacies happens silently and suddenly, snowflake-like, the way Susan put the quarterback’s arm under her own, not a word spoken. I should have known.

Yet I did not know, or decided not to know, which qualifies me as a stunted schlub, or worse.

But for the record, here’s my defense. We won a football game that year, an rare event, and after the win, the week before Christmas, the team returned to the high school to celebrate. All were giddy. It was during the chaperoned party, near twilight, in the mobbed gymnasium of the high school, that Susan Todd approached me jubilantly, and kissed me about an inch to the left of my lower lip (I later dabbed the spot; had she missed?) “Aren’t you happy? I’m happy,” said Susan Todd, her future quarterback husband and daughters-to-be still in a drawer, unopened, untouched.

She then retreated from my sight, her graduate’s eyes twinkling, leaving me adrift, my longing first abstracted, then vacated.

Only much later did I remember the braid of mistletoe camped aloft in the corner of the gym where I’d stood, and where she’d found me to kiss. And later still, after many flawed courtships and fumbled adult intimacies, that I chose to believe she hadn’t seen it, and that the kiss was mine.

“Eternity is in love with the productions of time,” wrote Blake. My own production gently suspended Susan Todd’s awkward Christmas kiss as time’s minor but tender keepsake, and then moved on.