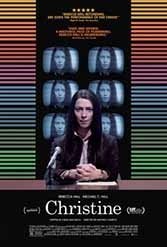 On July 15, 1974, a month before Watergate-tainted Richard Nixon resigned the presidency, a local TV news reporter in Sarasota, Florida named Christine Chubbock told a live news broadcast audience that in keeping with her station’s “blood and guts” approach to local coverage she was about to present a television first. She then shot herself in the head.

Director Antonio Campos’ fictional recreation of the events leading to her suicide is emblazoned with one name only, Rebecca Hall. It is Hall who plays the troubled and vaguely maladroit Chubbock, a 29-year-old who despite her adult job seemed locked in a child’s uncomprehending world, unable either to understand it or meet its sexual, emotional or professional demands, hating herself as a result. “My life is a cesspool,” she tells her protective but uncomprehending mother Peg (J. Smith-Cameron), with whom she lives. More to the point, she fiercely and severely challenges herself “to make sure that I’m really saying something,” but never seems to measure up to that challenge, let alone know what it is she wants to say.

No one knows why Chubbock did what she did. Campos hints at a strange brew of depression and inner attention-seeking, the latter triggered by an awkward and unrequited crush on anchor George Peter Ryan (Michael C. Hall). He pays attention to Chubbock’s interest in performing with hand puppets for children, as if the puppet conversations provided the subtext to some inner monologue. But these details may be beside the point, since Hall’s performance is so alarmingly true to human discomfort with the world, absent meaningful friendships and relationships, that the suicide needs little explanation. It is seamlessly persuasive acting, giving the film its purpose and drive.

Chubbuck’s suicide gave Paddy Chayefsky the idea for his groundbreaking1976 black parody on the dangers of TV narcissism, “Network,” with Peter Finch playing a washed up anchorman who promises to commit on-air suicide but not before uttering the epochal line, “I’m mad as hell and I’m not going to take it any more.” Footage of the Chubbock shooting was never shown after the live broadcast and thankfully remains out of Youtube’s reach, at least so far.