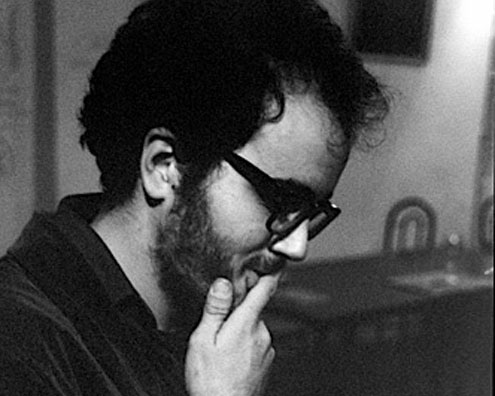 Some say Christian Raimo recounts his generation’s malaise, its solitude, its attempts to find love (or failing that, temporary company) better than anyone else in Italy today. Opinions vary, but Raimo’s portrait of a generation, elaborated over two collections of very successful short stories, the most recent being Dov’eri tu quando le stelle del mattino gioivano in coro? is undoubtedly heartfelt, consistent and affecting. (“Where were you when the chorus of morning stars rejoiced?”)

The 29-year-old author, with two books of his own under his belt, has translated American novelists David Foster Wallace and Charles Bukowski, among others.

He is also co-editor, with author Nicola Lagioia, of the contentious anthology, “La qualita’ dell’aria” — a recent publication from Italy’s hippest young publisher, “minimum fax,” that gathered together 18 authors and one illustrator in an effort to interpret and recount the zeitgeist a là Italiana. Michael Reynolds talked to Raimo in Rome.

Editors and writers keep saying that the short story doesn’t pay in Italy. Nonetheless, you continue to write short stories that enjoy both critical success and a loyal, ever-expanding readership. Is there something behind this insistence on the short story?

It is a question of creative honesty. I believe that a writer should do what he knows how to do and do it in the best way possible. At the moment, I understand how to write pieces that are sixty, seventy pages long, no more. I’m currently “measuring myself” against the structure of a novel; but I realize that to write a novel one needs different tools.

And the necessary time.

Of course. At the moment I am finishing a novel written with three other people — writers Nicola Lagioia, Francesco Pacifico, and Francesco Longo. This I can do, write a novel collectively, that is. But thanks to this experience, I’ve learned just how much time it takes to write a novel. A short story is different. You can write it in a single session, in three or four feverish nights. To write a novel you need a structure, a vision of the world that is robust enough to sustain the work involved, but which cannot be forced or invented.

Yet, often that structure is forced. I come across a lot of novels that would have been great, long short stories, but instead are sloppy novels. It’s very common. Several years ago I showed some pages of a novel to a publisher and they liked what they saw. I was 22. They told me to finish the novel, they offered me a contract, an advance. Now, when you are 22 and someone offers you an advance… well, I was obviously very, very happy at the outset. So, I started to work further on this novel. But at a certain point I didn’t really care anymore about what I was writing. I understood then that I knew how to do this thing, write short stories. And this is what I want to do. Many novels published by emerging Italian writers are either gaping, long-winded monsters or short stories stuck together. I didn’t want to do something like this. I believe in the intensity of a page. Every line, every chapter, every page must be given the right amount of attention.

Do you think this idea of the short story is a prejudice on the part of publishers? Or is true that people just don’t read short stories?

A bit of both, I’d say. Courageous publishers (those that don’t declare bankruptcy within a couple of publishing seasons) are few and are often destroyed by the large publishing groups that tend to profit off of the courage of others. I mean, they literally steal authors from smaller publishers, and thus diminish experimentation by smaller publishers. A good test will be the latest book by David Foster Wallace, “Oblivion” published by Einaudi. It is a difficult book of long tales that is nonetheless being marketed to a large, mass public.

Your new book is a collection of ten stories that I have heard described as in some way a continuation of the ones in your first book, “Latte.” Do you think of them in this way?

It’s true that in “Latte” many characters stop short of making a decision. That book brought its characters to an extreme point, a fork in the road, right before the moment in which they had to decide. In this book, the characters are in some way beyond that critical moment and are dealing with the consequences. They have made their choice, for better or for worse. On the other hand, and as opposed to my first book, the situations described in this book derive from events in which I was directly involved, situations that I lived, rather than being literary choices as they often were in “Latte.” I think that makes it considerably different to my first book. “Dov’eri tu quando le stelle del mattino gioivano in coro?” was not published because I had the need or the express desire to be published again so soon. I simply realized that I had something to say.

You recently edited an anthology of young Italian writers with Nicola Lagioia that a stir, La qualità dell’aria (minimum fax, 2004). The preface of this anthology, employing a more than slightly ironic tone, describes the anthology as responding to an urgent need: the need to tell the story of Italy today. Was it succesful?

Some of the stories are very insightful and inspired. Valeria Parrella on the schooling crisis, for example. The anthology did a good job recounting how writers of this generation have lived their recent pasts. There is a mix of feeling out of one’s element, historical syncretism, infantile illusions, the effective representation of a modern, collective imagination formed by television. All these things put together produce a critical landscape that makes the book important.

Are there more points in common or points of divergence between the writers represented?

I had never before felt such a degree of affinity between writers, so I would say more points in common; not in the themes or the stories dealt with but perhaps in the sense of what it means to be writing today. The literary barons and the octogenarian stalwarts of Italian letters destroyed the book. But I think it was very representative of a way to make literary fiction today. Certain characteristics — like the attention to form, faith in the literary art, etc. — were very noticeable, as opposed to “contenutismo” (the emphasis on content). These characteristics are very much a part of this coming generation of writers. This anthology gathered together a group of people who believe in the power of narrative.

The current generation of Italian writers is subject to a lot of criticism. There are those who maintain that Italy is currently in one of its least creative periods ever. Do you share this opinion?

It’s interesting what Voltolini said three or four years ago at the festival of Mantova in response to this sense of crisis. He named almost 100 books published over the last ten years or so that he thought deserved to be read. Ten books a year is not a bad rate! The truth is, there is always this sense of coming or present catastrophe; and perhaps there must be. But the tendency towards proclaiming one’s own time catastrophic is one of the worst ways of being reactionary. The premise is always the same: It was better before; there’s nothing around now, etc. etc. But I think, more than anything else, this kind of attitude simply indicates a kind of intellectual laziness. There are still publishing houses that are experimenting, risking. It is not so common, particularly among the big publishers. But the smaller, mid-sized publishers are picking up the slack. There are a lot of good things out there.

There is a certain vitality in American writers under 40 that is not present in the writers of the same age from the UK. Perhaps a simple explanation might be that in the U.S. there is this unbearable, imperialistic president whom most writers totally disdain. Literature becomes one of the spaces in which this antagonism is expressed. In England, with Blair, this antagonism is subtler. It’s no coincidence that social discomfort, or metaphysical malaise is not among the most obvious themes in New British Blend; more often the writers speak of multiculturalism and sexual identity. Do political monsters create more contrast and therefore a better literature? I don’t know, really, but during Thatcher’s reign, for example a writer like Ian McEwan emerged.

Were you surprised by the results of the 2004 American elections?

At minimum fax, with the many fans of contemporary American writing that there are in the editorial offices, we were reflecting on the fact that we don’t know a single writer who supported Bush. And obviously the majority of the American intellectuals and writers that I know are part of the political conscience of America, and are therefore anti-Bush. I suppose we still have an idea of a nervously creative, liberal, beat generation, hippie, Generation X America. That is, we know “coastal America,” California and New York — metropolitan America. This was, perhaps, also the idea of America that the Kerry camp had and what led to an error in their political forecasts. The “unknown America,” America that counted so much in the elections — rural, fundamentalist, religious America — is a world that, culturally speaking, is somewhat hidden and unrepresented.

Strange to think that such a large group of people with such strong values does not possess a literature that mirrors it.

The only writer who comes to mind is Flannery O’Connor. She sought the true character of the Bible Belt in her writing. But she was also able to put that kind of religious fundamentalism in crisis, treating it as Jesus did the Pharisees. Hers was a very effective intellectual operation.

It makes me wonder how much of what we consider the best of American writing is really representative of America and American people.

You know, when “The Burned Children of America” came out we thought this: many of these writers seemed to manifest a kind of malaise caused by their being American. They seemed not to be comfortable with the fact of belonging to a country that was so powerful, and which had such explicit imperialistic designs. Many of the stories spoke of characters who were sick, deformed, broken, etc. I think this distress is symptomatic. The characters are broken, deformed because they live in a country that breaks and deforms the world. There were many cases, for example, of disappearance. Characters who disappear completely or become shades, ghosts — as if American writers were ashamed of their own identity, of their very being — characters who become ghosts, who don’t vote, whose rights are taken away, who are no longer part of the system, who are no longer enfranchised. This was most evident in the work of Alice Sebald, Jeffrey Eugenedis, or Daniel Clowes. I was very surprised by this kind of boycott of the self; it seemed to indicate a boycott of existence as an extreme form of political activism in a world made of values that one no longer recognizes.

About the Author: Michael Reynolds

Michael Reynolds was born in Wollongong, Australia in 1968. He has taught modern literature in the U.S., mined gold in Australia, lifted peat in Scotland, and worked as a medical guinea pig in France. His first collection of short stories, a collaboration with American painter Troy Henriksen, entitled Sunday Special was published in 2002. His stories and other writings have appeared in Zzyzyva, Accattone, Crocevia, l’Unità, Heat and various other magazines. He is the founder of embrio Live Literature, an international live literature festival held annually in Rome under the auspices of embrio.net, a multimedia laboratory, and he performs as a member of the musical formation Liù. He lives in Rome, Italy, where he is currently at work on a novel and a new collection of short stories.