Christ Stopped at Eboli: The Story of a Year 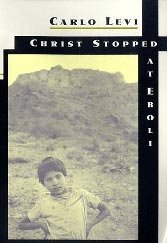 By Carlo Levy, translated from the Italian by Frances Freneye

or decades, well-meaning reviewers of Levi’s masterpiece saw it as a dissident’s lyric ode to the pathos of rural life. While Levi was in fact an anti-Fascist, “Eboli” is only passingly political. It is work of poetic if non-sentimental social anthropology that exposes the medieval heart of Italy’s deep-south soul in the third decade of the 20th-century. What emerges is a diseased landscape wholly and perhaps permanently remote from institutional politics. Levi’s quietly detailed recollections conjure a pastoral-in-reverse, replacing rural romanticism with the cruel, the bitter, the primeval, and the superstitious. Together, these ingredients make for a fatalistic but at times cheerful realism that imbues southern peasant life with a morality as deep as it is illiterate. Politics and Mussolini are incidental, as are rules, but Levi, forced outside convention, is smitten to the point of Stockholm Syndrome: “I was my own master among these silent wastes,” he writes; he and his trusty dog Barone.

Mussolini’s practice of confino, or banishment to the badlands, was itself a vestige of ancient punishment. Levi, a Turin-born Jewish doctor, painter, and humanist, was sent first to the town of Grassano and then, for a year, sent to more remote Gagliano, both in Basilicata (then known as Lucania), near Matera. But what was intended as a demoralizing eviction instead woke the observant Levi into yearlong reverie. Drafted reluctantly into the role of country doctor, he deals daily with a malaria- and anthrax-infested Bourbon Italy where time has stood still not for a century but five. “Here, where Christ had not come, the Wise Men, too, had never been seen.” In wisdom’s eclectic place are ghouls, sprites, stories about dragons, and “a pig doctor with the red whiskers of a Druid priest.” Jaundice is a sickness caused by rainbows and feudal locals put the Black Madonna and FDR on the same pedestal. The madcap juxtapositions ironically give Levi a sense of peace.

“I loved these peasants,” he writes, “…impervious to political reasoning and party slogans…” and the affection shows. So does surrealness: “I felt detached from every earthly thing and place, lost in a no man’s land far from time and reality. I was hidden like a shoot under a bark of trees, beyond the reach of man.” If you seek true Hobbits, good, bad and ugly, put aside Tolkien or George R.R. Martin and come to these 1930s.