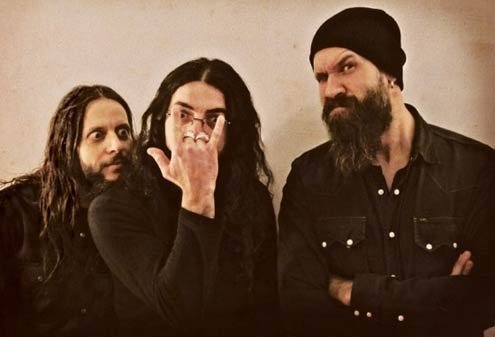 here’s nothing to break up the monotony of a week like a good guitar record. The power of a group of people with axes to grind (as it were) can be a refreshingly redemptive experience. It’s easy to lose sight of that when so many are available nowadays.

Few rock bands redeem quite like the slow-burning sludge masters in Milan’s Ufomammut. I’ve mentioned them before and, after two years touring and writing, they’re back with the five-track full-length ORO: Optimus Prime (Neurot). Like 2010’s Eve, ORO is a testament to patience and the long build.

Recurring melodies reveal themselves cyclically — a line you may hear amid the swirl of guitar distortion on opener “Empireum” is back in a different form on “Magickon” or the crashing conclusion “Mindomine.” The vocals are a bit rawer this time, a haunting growl rather than a distant moan on “Infearnatural” a prime example of the subtle change.

Their overall sound has only minor tweaks from Eve, but consistency in this case is a good thing. Tons of bands have copped the moves of metal giants Neurosis in the last decade, but few have done it with the conviction of Italy’s best band. It makes all the sense in the world that they should at last wind up on same label as their inspirations. The secret is out.

The secret is also out on California’s Ceremony for their fourth album, Zoo (Matador). The Bay Area band has long been in the throes of the hardcore punk scene there, but by jumping to a high-profile label in Matador and refining the aggression some, they’re asking for attention.

They’ve certainly gotten it. The response to Zoo has been surprisingly derisive and most of the negativity revolves around Ceremony’s tired trope of growing older, slower and more boring. Critics cite stalwarts like Fugazi, labelmates Fucked Up, and similarly crusty ex-noisniks The Men as better examples of transitioning away from youthful vitriol.

I don’t agree. Zoo is a raucous post-punk album that rarely bores as long as the occasional atonal wail works for you. Frontman Ross Farrar slurs, spits, drones, and practically falls over himself on “Nosebleed.” And that’s just the mental picture from one song — each of these dozen songs is fueled by a chugging grind on the guitars and crashing drums. If you like it snotty and sarcastic, you’ll love this.

There are hooks, by the way. “Quarantine” is practically a rockabilly number, “Hotel” has a sort of drowsy chorus, and “Video” is a subdued finisher. At their best, they remind me of Wire or Panthers in their prime. The difference is that you’re reacting on a more gut level with Ceremony. This is pure animalism. It’s a Zoo, after all.

On the flipside of that immediacy are the sinuous subconscious explorations of Moonface. Predictably, it’s been a long and winding road to get to the latest album from Vancouver, Canada’s Spencer Krug: He started out in the winding indie-rock of Frog Eyes, then bolstered it with the decade-defining Wolf Parade and Freudian rock of Sunset Rubdown (not to mention Swan Lake and Fifths of Seven).

Leaving these other projects aside, he’s recently focused his energies on Moonface and the result is With Siinai: Heartbreaking Bravery (Jagjaguwar). As its title suggests, this is a collaboration with Finnish quartet Siinai. The results are compelling.

That’s not really a surprise. Krug has always been adept at storytelling in a way that, though you may have no idea what he’s singing about, suggests he’s pulling from either his own gray matter (or yours) with nothing so much as an organ and a uniquely quivering delivery.

What’s striking about this album is how Siinai provides tasteful accompaniment. Moonface on previous albums could be a trying listen because Krug was baring his (or your) soul with minimal accompaniment. If you weren’t into it from the get-go, it was exhausting.

Siinai’s lush instrumentation on a song like “Quickfire, I Tried” or “Teary Eyes and Bloody Lips” complements Krug’s voice to add that essential grandiosity he so richly deserves. It reminds me of the most recent Frog Eyes album Paul’s Tomb: A Triumph in this respect, an album equally indulgent and guitar-filled. Just a hint of reverb on the vocals and a patient hook on the half-speed closer “Lay Your Cheek on Down” is enough to make this song sound massive.

Sometimes, that power can only be conveyed through the beauty of the guitar. It’s nice to remember how.