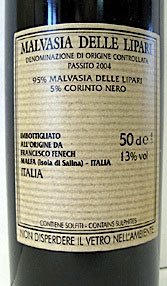 Sicilian Malvasia delle Lipari is a blend of Malvasia di Lipari and Corinto Nero.
A

ll of life is a dispute over taste and tasting. Nietzsche

Recommending or serving a good wine to people you know is easy. You study the idiosyncrasies of the potential drinker and match them against wines that are usually well-accepted by others with similar tastes.

Writing a wine column is intimidating.

Ask me to recommend a wine to serve to your 300 guests who have flown halfway ‘round the world for your once-in-a-lifetime wedding at a medieval abbey in Tuscany and I will titillate them and you with a wine from Abruzzo (“Tenuta di Testarossa” Montepulciano d’Abruzzo D.O.C.). Allow me to choose the wine for dinner at an important contract signing and I’ll have you happily drooling as the sommelier uncorks a bottle of “Pio Cesare” Barolo. Or just come over to my house for a spontaneous fiasco of Chianti and cavatappi venting and, like my girlfriends, you will rarely be disappointed.

But ask me to write a wine column and my blood turns as cold as a chilled glass of Malvasia delle Lipari.

Why? Because my tongue’s taste buds don’t often communicate with my keyboard finger-tips. Worse than that, complex algebraic formulas rating one wine a 97 and another an 88 always serve to remind me why I hated math in school. In fact, so much of today’s wine writing sounds like pretentious grape frippery — even to me. I mean really, what does musty undergrowth smell like anyway?

The problem is that certain compounds, inherent in grapes, called “pyrazines,” do in fact produce that nose-scrunching “pipì di gatto” scent that distinguishes Sauvignon Blanc. And surprisingly enough some Rieslings honestly have a whiff of kerosene or diesel.

So does that mean wine writers aren’t pretentious idiots after all? (I’ll let the reader decide.) But the truth is that all wine writers are afraid — though some won’t admit it — that the poured glass will always speak more eloquently than well-intentioned or flowery words. Or worse, that the glass the writer describes as having legs as long as a Modigliani painting, the reader sees as a Picasso.

So how do you write about wine without it sounding like so much pretentious twaddle? And what does all this self-conscious teeth-gnashing mean with respect to my outlook?

The answer is that I’m counting on your curious minds. Here then is a closer look at the wines I mentioned above:

No, not the Ferrari, but a glassful may make you purr like one. Testarossa is produced from some of the oldest and most densely planted Pasetti vines (median age 40 years). Grapes are harvested late in the harvest season, fermenting in steel and wood. The wine is then matured for an additional two years in large oak botte. It is a pleasurable wine for pairing with hearty autumn foods such as Bistecca alla fiorentina, Polenta con la Salsiccia or roasted meats. A wine that won’t break the bank, Tenuta di Testarossa is drinkable now, and suitable for holding for the next few years.

This fourth generation producer of Barolo has been producing wines since 1881 and their time-honored experience is evident in your first sips. A tempting garnet-colored vintage derived from Nebbiolo grapes, grown on both the family’s vineyards and a blending of the same varietal, cultivated in nearby Castiglion Falletto and/or Monforte. Grape clusters are hand selected, then soft pressed in contact with the skins for 20-25 days and left to mature in Slovenian oak longer than D.O.C. rulings require. A wonderfully intense, playful Barolo that is perfect for cellaring and celebrating.

A blend of Malvasia di Lipari and Corinto Nero, this Sicilian wine is made with techniques that have changed minimally over the centuries. The viniculture of the Lipari islands dates to the 4th and 5th centuries BC when grapes were gathered at an extremely ripe stage and left to dry in the sun for 10 to 15 days on large mats made out of bamboo canes. The tradition remains. The grapes are later crushed, fermented in casks, and finally decanted into barrels. The wine is produced in very limited quantities, but, like all good things, is worth looking for.

— Write to Lynda Albertson at maginfo@theamericanmag.com