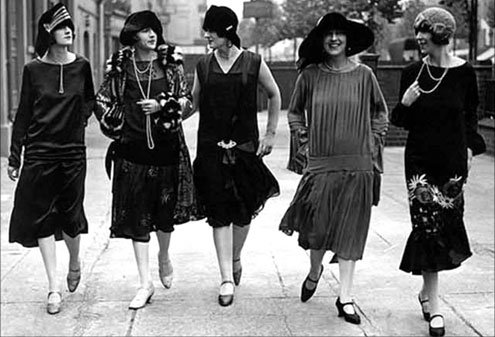 The Flapper generation transformed the way women could dress in public.
M

rs. Towle made the best chocolate chip cookies (with black walnuts). She said the secret of good cooking was to use butter even when the recipe called for shortening and to substitute cream for milk. Mrs. Ball had a hat made entirely of peacock feathers. Every year she created her own Christmas card with a delightful drawing and a pun. Alice always wore pearls; Elizabeth made up clever and entertaining treasure hunts and costume parties. When my parents left us with Chi for weekends, she’d play cards until long after bedtime, tell politically incorrect jokes, drink highballs and smoke.

I hadn’t thought about Mrs. Towle or Mrs. Ball, Elizabeth, Alice or Chi — all dear friends of my mother and grandmother — for decades. Until I stopped by a friend’s for an aperitivo. My friend’s now-adult daughter was also there, and as we enjoyed prosecco, olives and mozzarella chunks, her daughter and I made some discoveries. She was no longer the sullen adolescent who always sounded annoyed when I called. And to her, I was no longer the boring old lady on the phone.

I was flattered and invigorated; she was excited to become a partner in adult conversation.

Biking home, I thought about the central role played by the friends of our mothers and grandmothers, who are living connections to the past and to many ways of being women.

My grandmother’s friends wore “rouge” and red lipstick — it didn’t matter that they were out of style and too strong for their aging faces. In their faces and dowdy cosmetics were living traces of 1920s flappers, a generation of women who had seized the right to have fun and be independent. My grandmother’s friends referred to everyone as “Mr.” or “Mrs.,” reflecting a now-lost respect for the distinction between public and private spheres and eras when you didn’t use a stranger’s given names. In photos, my mother’s friends wore World War II uniforms. Wedding pictures of them dressed in everyday clothes with husbands in stiff new uniforms speak of wartime haste.

The friends also helped reveal sides of my mother’s past and personality I’d never known.

Shared stories of the Depression and unreliable husbands taught me — and them — about the importance of economic self-sufficiency. Of my grandmother’s friends only one (Florrie, a reporter) had skills that weren’t product of careful rearing and finishing schools. Her other friends smocked dresses and taught French or music.

By the next generation things had changed. My mother’s friends had college educations and careers. One was a pathologist, another taught school and Chi managed money and taxes for wealthy widows. All were tireless and effective volunteers.

But there was always time for fun. Mrs. Towle, Mrs. Ball and others played a long-running prank, sending a tacky doll — called “The Love Child” for unknown reasons — to each other disguised as an appealing gift in a fancy box (“The Love Child” was lost at sea in the Battle of Leyte Gulf).

These friends — and many others — were in some ways comfortingly similar to my mother. But they also offered different role models and opened windows to other worlds. They proved the house of female gender has many mansions.

Chi didn’t have a feminine bone in her body, but always wore a kilt, even to play golf. Another friend, Mrs. Brand, gladly lent and discussed all the latest books and let me watch “Upstairs Downstairs” (we didn’t have a television). She also introduced me to1960s counter-culture via tales of her son’s life among author Ken Kesey’s Merry Pranksters. Another friend, Margot, was a fashion illustrator who attended the Paris collections every year (she went by liner), eliciting the kind of glamour my mother never could. Janet played professional-level bridge and Jayne carved wood. Chi was a gifted amateur architect. Carol studied Ikebana in Japan.

Depression, disease, divorce and drink derailed several of them, which taught me lessons about adulthood, loss and cracks in facades.

My mother was able to turn these losses into opportunities and eventually found new friends from outside her circle — yet another lesson. No one, my mother said, understood her like Khorshed, a Parsi from Bombay, or Dinah, from northern England.

It also worked the other way, and women who treasured her friendship filled my mother’s funeral.

These reflections on family friends made me turn to the relationship I have with my college-aged daughter. I wondered if she’d learned from my friends Eleanor, Paola, Lynn and Piera just as I’d learned from Chi, Marty and Mrs. Towle?

It turns out she did. She watched Paola for clues on how to dress and looked to Eleanor on how to speak up. Lynn demonstrated that a career in science goes hand-in-hand with being wonderful hostess. And of course she learned things about me.

But what she most appreciated, my daughter told me, was that my friends always made her feel like an adult. Just as my mother’s made me feel.