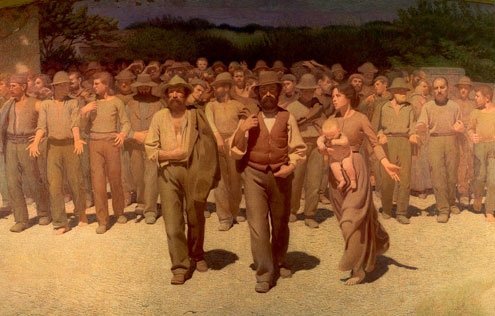 adore the unthinkably beautiful inefficiency that characterizes my Rome neighborhood on May 1. It is inefficiency of the kind that would scare North America into hysterics. The larger supermarkets, all three of them, are closed. So are the shops. Not one shop, all shops. The bank machines mostly do not work. They’re broken, or more charmingly, “unavailable.”

This — the giddy white noise of stylish indolence — is what it’s like to live in north Rome on May Day, a one-day slice of worker’s paradise in which most employees are relieved of their burdens. Since May Day 2014 falls on a Thursday many have already tacked on Friday. My superintendent, absent beginning Wednesday evening, has posted a handwritten sign on his outside hut: TOMORROW NO, after which comes the weekend.

May Day honors the old Socialist holiday, made sacrosanct (or not) in the days when communism knocked on the door of the world’s roaring 20s — or roaring comeback in the case of post-war Europe. In fact, May Day was created to honor striking workers in Chicago. As it turns out, the actual worker’s paradise never came to pass, nor did the fruition of communism — which soon turned hateful — leaving only ripples in the greater pool of randy commerce.

Not that I object to randy commerce: it powers the world’s only known and effective currency, cash, and creates the disparities that gives all social drama its purpose. It’s not for me to object or play pope, gnawed with worry that too much money makes for spiritual bankruptcy. That may well be true but by now it’s too late. Better the pope turn to carbon emissions or argue against the overuse of antibiotics. He could be the pope to talk antibodies.

It is of course the pope who is in part to “blame” for today’s devout silence, since well before communism sounded its trumpet the Rome Catholic Church enumerated scrolls of spirit days (many lifted from pagan precursors) that Italians swiftly took to heart, though some used devotional days off to thieve, make merry or hunt down animals, or bed women, sometimes both.

Rome’s coercive sloth — still commanding even now, in the busybody 21st century — derives from centuries of spiritual time, in which only the Church bureaucracy functioned, national government its adjunct, both intentionally working at a snail’s pace. Slowness made for the paying less attention. Would-be sleuths, eager to subvert the prevailing authority, simply died off. Churches took not decades but centuries to build, a soporific intention, the legacy of labored building carried down and forward so that generations of Romans were weaned on the city’s slow-time.

Now, slow is back in favor, at least allegedly: take SlowFood. Eating as lyricism. But that’s a construct, a marketing device; it imposes slowness to make it ring sexy to the stressed. Why not? Slow can sound godly to those going fast. The fast fantasize respite.

On May Day, my Rome lives out their fantasy, but it does so uncontrived. It goes where most Western cities can no longer go, to a place where bewildered streets suddenly long for cars. Urban commonplaces vaporize, the collective vanishing making Thursday 2014 seem like Sunday 1914, like a day on the eve of some great war. In fact, this day lies on the cusp of tourist season, its blue-skied beauty perfectly suiting the official emptiness that defines it.

I poke fun of Rome often. I am not alone. Thousands of books have been written, and now blogs produced, about the legendary inefficiencies this faux-modern city dishes up and out. But there’s no making fun of a day like to today, let alone workers in paradise. The hiatus allows pavement to relax, aisles also, if only briefly, until the maddening hubbub — maddening in Rome terms only — reasserts the music of claxons.

By which time I will have retreated back into my apartment sanctuary, sated by the larger silence and ready to re-hibernate, circling the next May Day on my otherwise blank calendar, all the while knowing May Day 2114 — though well past my bedtime — is likely feel the same.