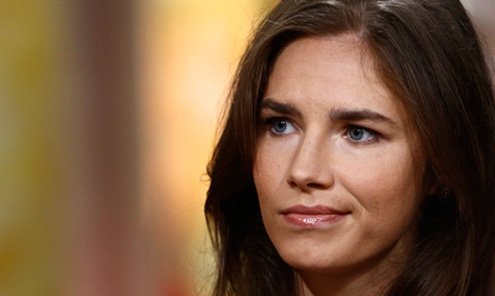 Amanda Knox, now 28, may face extradition if her conviction is upheld.
T

he axe of a woodcutter must land true on a log to quickly slice through its hardened grain. To do that the woodcutter must stay focused on the wedge he’s opening and ignore the chips that scatter about. The same can hold true of a murder trial. The truth is buried in a maze of conflicting evidence and lawyers for the prosecution and defense seek to guide the court away from the scattering to show clear proof of guilt or innocence.

The trial of Amanda Knox and Raffaele Sollecito is expected to reach a late March climax — March 25 is the assigned date — in the crucible of the Court of Cassation (Italy’s highest appellate court) where five justices will hear the appeal against their conviction for the 2007 murder of Meredith Kercher in Perugia. All three were students at the time.

The notorious case has given all levels of Italy’s court system — trial, appellate and Court of Cassation — a mother lode of conflicting evidence. In play is the veracity of DNA evidence on a kitchen knife, whether a second knife was used, police procedure in gathering and handling evidence, police interrogation tactics, Knox’s behavior following her arrest, and Rudy Guede’s confession to committing the murder — he is serving a 16-year sentence. Allegations of sex games, crime scene investigation practices, and the role of broken glass have also been analyzed.

I recently discussed the case with Knox’s defense attorney Carlo Dalla Vedova. He was adamant about the proof the state needs to convict his client. In Italian legal terms, the evidence must meet three fundamental criteria. It must be “precise, ” “certain” and “in accordance” — precisi, certo e concordante.

“Precise” in that there can be only one explanation for what happened. “Certain” in that there can be no doubt about the quality of the evidence. Finally, these two elements must jibe — they must be “in accordance,” or perfectly linked. Any doubt about any of these factors, said Dalla Vedova, and the court must rule in favor of the defendants, based on reasonable doubt.

To convict Knox and then-boyfriend Sollecito, the prosecution must prove both were at the scene of the crime; that the knife cited as the murder weapon is just that; that no scientific doubt exists regarding the DNA evidence on that knife and no alternative explanation exists than it having been used to murder Kercher.

The prosecution’s use of circumstantial evidence to theoretically explain the crime as well as the motives and intent of the defendants has long been under fire. Again, it will be precision and certainty that matter.

The case has a complex history. In December 2009 a trial court in Perugia convicted the defendants, with Knox and Sollecito each sentenced to long jail terms. But two years later a Court of Appeals in Florence overturned the ruling. On March 26, 2013, following an appeal by the prosecution, the Court of Cassation ordered a new trial, and on Jan. 30, 2014 the Court of Appeals in Florence reinstated the original guilty verdict. The defendants appealed that decision claiming the evidence did not support it. Now the case returns to the Court of Cassation.

The hearing is likely to be held in a small courtroom in Rome’s Palazzo della Giustizia near the banks of the Tiber River. The press but no cameras will be allowed into the courtroom. There will be a limited public gallery.

The reporting judge (relatore) will summarize the previous court decisions, after which the state prosecutor (procuratore generale) will present the state’s charges against the defendants. Finally, Dalla Vedova and co-counsel Luciano Ghirga will present Knox’s defense, with Giulia Buongiorno and Luca Maori doing the same for Sollecito.

The hearing will emphasize brevity. Attorneys will be limited to 20-minute presentations while the state prosecutor will have somewhat more time. The court is expected to announce its decision on the day of the hearing or the next day at the latest. It may find for the defendants, in which case the state can appeal; it may annul the appeal court decision and remand for a new trial; or it may confirm the guilty verdict.

The final scenario would end the third stage of the Italian criminal trial system, exhausting the defendants’ ability to appeal. Sollecito, who is in Italy, would begin his jail sentence. Italy would then be confronted with the matter of whether to seek extradition for the 27-year-old Knox, who returned to the United States in 2011.

Over the years, the case has been rife with changing verdicts, differing shades of evidentiary interpretation, accusations, grandstanding, media mania and politics. That makes it easy enough to imagine this appeal will come down to which side blinks first, the prosecution or the defense.

But after more than seven years, the Italian criminal justice system owes Knox, Sollecito and Kercher’s family a final, well-considered and sure-footed ruling on whether the prosecution has proved its case. Only when the justices decide beyond any reasonable doubt that the evidence presented in Florence was precise, certain and in accordance can they rule. After which the chips will fall where they may.

— Editor’s note: The author practiced with the Dalla Vedova Studio Legale firm from 1984 to 1991.