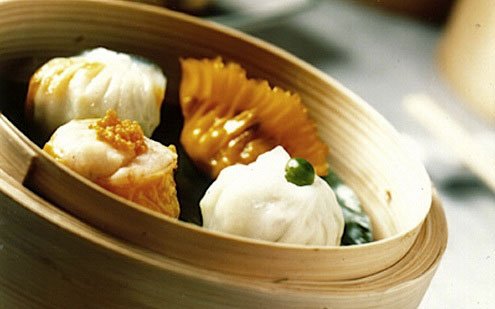 The fact that Simone has never eaten Chinese food is shocking.
I

push past two glass doors dividing a painted pagoda, holding the right side open and looking behind me to make sure Simone hasn’t changed his mind. We’re greeted with a smile and an accented invitation to sit down near the faux bamboo shoots. The menus haven’t even arrived, but Simone is already lost in translation. He unwraps the chopsticks from their sleeve and examines them with both hands in utter confusion before turning his blank stare at me. I ask the waiter for a fork.

It’s odd that my roommate has never seen a film in a foreign language. It’s hard to believe that he has never stepped foot off of this island. But the fact that Simone has never eaten Chinese food is shocking. I’m fairly sure that there is at least one Chinese restaurant in every town in the world. Anyone who isn’t curious enough to have investigated a Chinese restaurant after 21 years on this planet is making a staunch statement against bringing themselves closer to understanding a changing planet.

Simone’s Chinese food virginity has been a sore point in the apartment since he first revealed it months ago. What began as “it’s just never happened” has turned into unlikely excuses to never try it. “You can’t trust those people,” he said. “You order pork and they give you cat. It happened to my friend’s friend.” I reminded Simone that people in Sardinia’s mountainous Barbagia region have munched on cat for centuries. No luck. So when Simone’s birthday arrived, I offered to take him out to dinner, my treat. I proposed the “Shanghai” Chinese restaurant — only 100 meters from our apartment, but far enough to provide adequate culture shock. I had made him an offer he couldn’t refuse. Better cat than figuraccia.

While globalization and recent pushes from the Sardinian government toward modernization have helped lift the island from historical inertia, the efforts have also created a cultural rift between young Sardinians who embrace traditional lifestyles and those who have started to look beyond their own shores.

My two roommates epitomize a young Sardinian population at odds with a shrinking world. They find comfort in what they know and are suspicious of what they don’t. As with many Sardinian university students, a heavy dependence on their parents leads them to return to their nearby towns every weekend. Cagliari is strictly viewed as a base to study, not a city in which to go out, and especially not one in which one buys groceries — which are bought back home and then hauled back to Cagliari in coolers by train. Inside the apartment, they only invite students they know from their hometowns and find my eating habits a constant source of curiosity.

“Why would you eat sausage for breakfast? Meat is a p.m. food.”

“Olive oil on your salad before vinegar? That’s not the rule.”

But while my roommates are limited by tunnel-vision, a growing number of young Sardinians are starting to recognize a stormy forecast on a sunny island. With the highest unemployment rate in the country (hovering at 20 percent overall and jumping to 50 percent for those under 25), and average salaries sitting at roughly €1,000 a month, Sardinia’s Godgiven beauty is offset by its man-made lack of opportunity. The limited job market has caused many younger Sardinians to leave the island in search of work on the “continente,” a telling phenomenon on an island that has traditionally looked inwards. In fact, the Sardinian population is shrinking drastically as tens of thousands of the island’s 1.7 million people leave every year.

The Sardinian government recognizes the urgent need for the island’s youth to abandon a history rooted in isolation and to embrace outside influences if the region is to prosper. Recent efforts, such as President Renato Soru’s “Progetto Marte,” is designed to allow Sardinian students to communicate with one another via e-learning and to pique curiosity about distant cultures and customs. It includes a “Sardegna Speaks English” program, for example. It’s still too early to measure the project’s success (it’s only been three years), but I still notice marked resistance. For example, most of students in my English class have sampled Chinese food, while most outside the school have not.

In the end, Simone slurped down all of his dum sum. He experimented with both soy and sour sauces when eating his dumplings. He even wrestled with the elusive chopsticks while finishing his pork. I wouldn’t say he loved “Shanghai,” but he didn’t have to. As long as he tells his friend’s friend that there was no cat in his moo shoo, it will have been worth it.