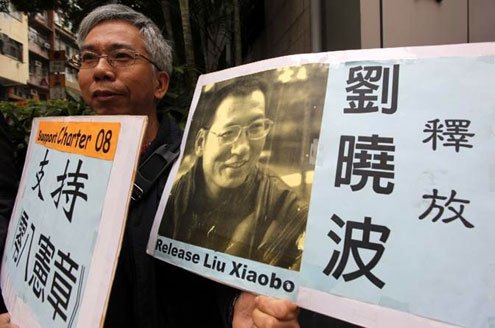 he outcome of Norway’s annual milk bone-fest has temporarily enraged a rather large and formidable dog, China.

Beijing had it coming. By warning the Nobel Peace Prize committee against honoring imprisoned dissident Liu Xiaobo it all but handed him the honor. Armchair intellectuals rarely resist the temptation of vexing institutional machinery when doing so doesn’t cause them physical harm.

Today’s China is the most peculiar of 21st hybrids. It hews to a paternalistically strict party system that keeps full-blown authoritarianism in check for the sole purpose of making money, nipping at democratic capitalism’s Achilles heel.

Global trade is nourished as a representation of nationalism while dissent is either officially quashed (Liu’s fate) or undermined by homegrown xenophobia. Tolerance of the West, seen as a necessary marketplace nutrient, is systematically offset by populist-style warnings about corrosive foreign values, a message broadcast mostly to the country’s inland acres. Its major cities, meanwhile, are advertised as Western “emissaries.”

Since market capitalism rarely tracks the moral compass of its biggest players so long as they spend, China circumvents the pariah status imposed on minor states whose frailty makes them more vulnerable to conscience-assuaging boycotts. China’s hosting of the 2008 Olympics codified the dynamic and ongoing Chinese exception, once and for all putting it outside the reach of embargos.

So when Norwegian eggheads — ambassadors of an “uplift-me” West — anointed their latest dissident hero, Beijing was ready with scripted remedies. It heavy-handedly shut down the BBC live feed of the announcement and began a “valorous” defense of China’s sullied name from real and imagined detractors.

Western intellectuals, it said, were sworn enemies of China. Worse still, they didn’t understand it. The real goal of Quisling dissidents such as Liu was to unravel China’s hard-earned global reputation as well undercut the benefits afforded by its economic miracle.

The approach also served to discourage Beijing’s greatest fear: widespread and coalescent labor strife. So far, China’s strikes have focused on poor living conditions and low wages. The anti-Communist tie-in that gave the Polish Solidarity movement its identity and eventually rewarded Lech Walesa with his own Nobel Peace Prize has yet to emerge.

Among police states, China can fall back on its Asian differentiation, claiming that the standards it is urged to follow offend its pride and don’t belong to its tradition (Europe-adoring Russia is hindered in this regard). Two decades after Tiananmen Square, it can still portray homegrown dissidents as the tools of a foreign intelligentsia.

It knows that peace prize controversies, like the news of Tibetan repression that preceded the 2008 Olympics, are not major media main courses for any length of time. Chinese business is booming, with financial ties being extended gradually into Africa and South America, broadening a quiet alliance of resource-hungry and resource-rich states, categories rife with repressive players.

China is also increasingly able to inflict hurt. When Beijing gets to patrolling its own shipping lanes — a task for now still mostly in U.S. hands — the global balance of power is in for a jolt. For now, Oslo’s Nobel words are unlikely to help Norway’s global trade ledger.

But Liu’s award begs a tangential question: Why are Norway’s Nobel lions so reluctant to take on Vladimir Putin’s Russia? Putin’s conniving decade as president and prime minister has transformed post-Communist Russia into a poorer version of China. Though Russian human rights activist Sveltlana Gannushkina is often mentioned as a candidate for the peace prize, the Nobel’s anointers seem to hesitate.

That may in part because Russia and Norway share a geographical history tied to Arctic borders and the Barents Sea. Russian troops – Stalin’s troops – helped liberate Finnmark, Norway’s Lapland.

Two years ago, when Norwegian Foreign Minister Jonas Gahr Støre urged Russia to embrace “true democracy” and resist authoritarian tendencies, he did so gingerly: “Our message is not intended to be patronizing. It is never wise to communicate in such a way.”

Though the Norwegian government and the Nobel committee don’t necessarily dine at the same restaurant, China remains easier to criticize, and patronize, than Russia (by contrast, last year’s choice of a newly-elected and untested U.S. president was obsequious).

The last Russian peace prizewinner was Mikhail Gorbachev, who received the award in 1990, homage in part for the Soviet Union’s undoing. While spanking China for its human rights shortcoming is both feasible and gratifying, going the same route with Russia, given the vicissitudes of European history, remains a bridge too far. “The Russians are proud people,” said Støre in 2008. Too proud, apparently, for Oslo’s October milk-bone merchants to shake a stick at.