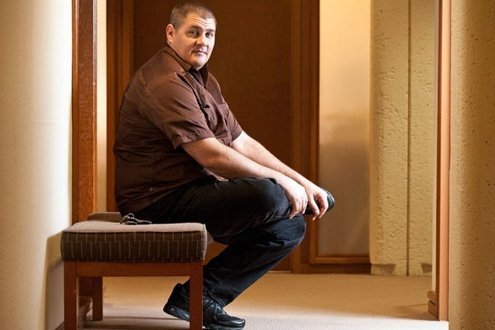 Adam Johnson's taste for the relationship between the day-to-day and the surreal has been compared to George Saunders.
A

And what a theme park sweep of settings. Two chilling tales examine dehumanizing dictatorships. Four stories look at America’s technological scene, and how it can radically distort what we think of as “being human.”

One of the L.A. stories, “Interesting Facts,” is worth a considered look, both for its extraordinary human empathy and technical virtuosity. Its first-person, present tense narrator is a terminal cancer patient and an unpublished novelist who discusses story ideas with her husband, who, like Johnson, has won a Pulitzer.

As the product (or victim) of medicine’s capacity to extend life beyond “living,” she’s now obsessed with writing a list of her treatment “facts.” “Tamoxifen makes your hips creak,” she explains laconically. As chemicals transform her organs into dry, rattling pits, “everyone treats me like a ghost.”

Through “the dark tunnel of morphine time,” she suddenly “sees” herself as a girl, riding her yellow bicycle. Seconds later, as an adult wife and mother, she’s in Golden Gate Park, straining to watch her family through the fog.

Johnson has such a comprehensive command of character voice that the reader identifies with her horrific struggle for survival. It is also a tale is also about struggling with denial, and it comes with a twist — the narrator died a long time ago.

Shedding denial, moving ahead, making choices, however grave the consequences or the risks — these are Johnson’s imperatives. His actors wrestle with identity in situations at once bizarre but also uncomfortably recognizable as part of daily reality.

The pages bristle with detail.

“Hurricanes Anonymous,” could be a docu-script on New Orleans in the aftermath of Hurricanes Katrina and Rita, both in 2005. Urban planning and digitally sophisticated survival mechanisms fail the city’s population. Volunteer, out-of-state rescue units get lost. “GPS, Wi-Fi, cellular and Bluetooth capacities [are] worthless since the hurricane.” Detached from any utility in their owners’ lives, possessions are part of a landscape detritus, with a half-life of their own: “… clothes hang in the limbs of trees, making it look like folks are up there watching… It’s spooky.” Here, once again, are Johnson’s ghosts.

The historical documentary “George Orwell Was My Friend” has former East Germany at its core. A former inmate tricks its ex-Stasi prison warden into a politically revisionist tour. They’ll visit the same cells and offices where the warden once proudly ensured that no convict arrived late for torture sessions. Orwell’s “1984” imprint is evident.

“Dark Meadows” is the digital moniker by which its narrator is known to fellow sexual predators. He’s freelance Silicon Valley hard drive repairman, but those he fixes are loaded with illegal videos of sex with minors. His invincible algorithms “clean” these machines. But no algorithm can scrub away his own perverted drives, or delete haunting memories of childhood sexual abuse. That’s his choice.

“Nirvana” is a grim look at the brave new digital world through the eyes of a Silicon Valley techie whose wife is bed-bound, paralyzed from the shoulders down. Sophisticated machinery and medicines keep her “alive.” She finds consolation in listening to Kurt Cobain’s pain-filled music: “he understands me.”

In his fraught caretaker life, her husband re-creates an assassinated president as a digital hologram that serves as his therapeutic companion. Its wraith-like form answers problematic questions, using programmed snippets of the popular president’s most soothing clichés. Online, the hologram goes viral. Within a day, 14 million people click on the amber-haloed giver of solace. Johnson again takes a nearly surrealistic situation and renders it totally probable. Since we can already enter chat rooms with programmed celebrity clips, why not download a hologram buddy?

In these brilliantly conceived tales of imprisoning worlds, each leading actor strives for choice and decision-making. Johnson leaves us with the slim hope — if no guarantee — that their choices might work.