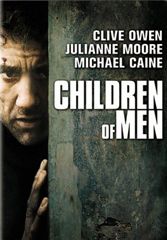 It’s 2027 and the planet’s youngest citizen has died at 18. Enter poker-faced bureaucrat Theodore Faron (Clive Owen), an amoral soul in a London that looks like a cross a “Blade Runner” Shanghai and modern Tirana (“Britain Soldiers On,” say TV adverts, showing conflagration elsewhere). The government even promotes a suicide drug called “Quietus.” Faron is kidnapped by ex-companion Julian (Julianne Moore) who heads a terrorist group called the Fishes (read your Bible) that wants his help in getting documents to spring a miraculously pregnant African woman named Kee (Claire Hope-Ashity) to the coast and the imagined safety of something called the Human Project.

No such safety exists in racist Britain where immigrants are reported, arrested, and caged. A genocide virtuoso (Holocaust, Balkans, you name it), Cuarón manipulates Tony Blair’s post-9/11 call for national ID cards into a vivid imagining of Anglo atrocities. When Faron agrees to help the Fishes and Kee for cash, Cuarón shifts into overdrive. Julian is gunned down. So is Faron’s sympathetic hippy friend Jasper (a sly Micheal Caine). Suddenly, he’s on the lam with pregnant Kee in tow.

At the core of this jerky yet visually poised fantasy (with comic one-liners) is a fable about the mixed blessings of a species passionately addicted to both conflict and renewal. Troops storming an immigrant concentration camp are hypnotized into a brief cease-fire — a moment of High Mass, literally — when they see Kee’s newborn girl, only to swiftly resume Sarajevo-like bestiality. But it’s Cuarón’s gypsy-like transcendentalism (mysticism feeding grace, and vice versa) that distinguishes this film from comparable efforts, including Terry Gilliam’s wild-ride “Brazil” and Danny Boyle’s bleak “28 Days Later.”