Children of a lesser god 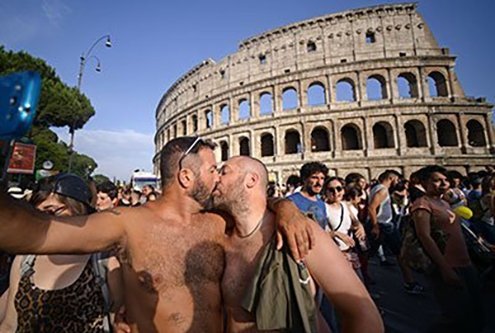 In May, Italy finally voted to allow civil unions between same-sex couples.
L

ast weekend my partner and I were having dinner with our friend Maria. “So are you two planning on getting married?” she asked me.

For Maria, like many 40-something single Italian women, the subject of marriage is touchy.

“But we’ve already been married for 11 years!” I replied. My partner and I married in Canada. I’m Canadian; he’s Italian. I now have Italian citizenship.

“I mean in Italy,” said Maria.

“It wouldn’t be a marriage,” I replied. “It would be a civil union.”

She ignored the distinction.

“You guys will probably be the one of the first married gay couples in Italy, you know.”

That I doubted. “There are lots of couples like us who got married outside Italy.”

She brushed this off. “It doesn’t matter. I want to organize the wedding and be the witness.”

I suspected she was dreaming of the wedding she never had. I suggested we return to the matter later, in the fall, when the civil union process was under way. I was hoping she’d forget the idea by then.

I didn’t have the heart to tell her that our Sicilian dance instructor had already announced he’d be best man at our “wedding.”

So what’s the big difference between marriage and civil union?

There’s no obligation to publicly announce the bond and no “trial” separation period for a couple that decides to break up, reducing costs and time. Partners are free to keep or change their surnames or to place their own surname before or after the shared surname.

One of the quirkier details is that’s there is no obligation to remain faithful to a partner in the context of a civil union, something built into marriage. That means infidelity can’t be used as a legal pretext for a breakup. It also means civil union partners don’t need to erase their Grinder dating accounts unless they want to.

But the legal rights of children and their protection are another story entirely. In that critical area, the gulf between same-sex civil unions and marriage remains vast. Though the new legislation is groundbreaking — it’s the first time Italy has recognized rights of LGBT people — gay people remain second-class citizens in basic family terms.

Part of the political price in getting the legislation passed was a government decision to drop a fundamental clause that would have allowed members of gay civil unions to adopt their partners’ children. For families that already exist, the scrapping of the provision barred same-sex “step-parents” from adopting the child they were already raising, one who already knows them as Mommy or Daddy. That means a non-biological, same-sex parent cannot legally represent his or her own children at school or at a hospital, where guardian consent can play a role. These children have no legal right to inherit from their non-biological parent. Nor are they legally part of that branch of their family.

The Catholic Church was and remains adamantly opposed to same-sex parenting. By Vatican logic, the ban on same-sex “step child” adoptions will ensure that gay and lesbian couples don’t leave Italy in search of surrogate wombs (surrogacy is also illegal in Italy). To hear Catholics tell it, a “womb for rent” is the equivalent of prostitution. If gay and lesbians were allowed to adopt their own non-biological children, it would inevitably lead to an explosion in the surrogate womb industry. From the Catholic perspective, barring same-sex “step child” adoption protects women in developing countries from being forced into the surrogate womb trade.

The ban also applies to lesbian couples that have sperm donations. Interestingly, I haven’t heard anyone who’s concerned about protecting men from being forced into making sperm donations.

As a result of these decisions, the legal and social rights of a child to complete access to (and protection by) both his or her parents is ignored in favor of combating what the Vatican and Italy consider a growing moral menace abroad.

“It is … a shame,” wrote the Milan newspaper Corriere Della Sera in May, “that Parliament [has] once again penalized the weakest members of the family, namely children, by not giving same-sex partners the right to adopt, despite the fact that due to long-term cohabitation they may have acted as a mother or father.”

The Church replies by maintaining that marriage is covenant with God. Though Pope Francis uses gentler language than his predecessor, he’s made it clear that same-sex unions cannot be considered the same as heterosexual marriages.

So it is that in the eyes of both Church and state, gays and their families are children of a lesser god.