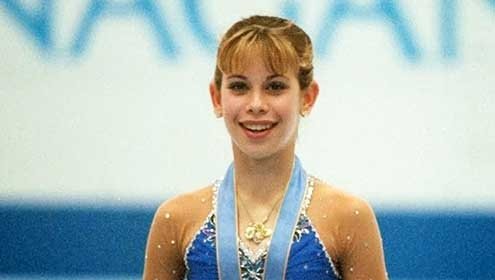 American figure skater Tara Lipinski was15 when she won an Olympic gold in 1998.
I

n the early 1960s I went to school with a figure skater that eventually won a silver medal at the Olympics. She seemed like a nice girl, but I never got to know her. By the time she got to school at 8:30 a.m., she’d already put in a couple hours of skating, or ballet, or some other physical activity. For me, 7 a.m. was too early to get up. She was up before 5. Then, right after school she was whisked off to hours of skating practice. She never came to a birthday party or played with anyone else after school. Her weekends were taken by training and competition.

She eventually made it to the Olympics. I remember my family watching and someone saying “That’s ridiculous, the poor kid, she lost points because one of her toes was not pointed when she did a spin!”

Watching her made me glad I had no special talent growing up, nothing that might have made me eligible for a stolen childhood. I lived far from school and other kids. My free time was my own, though occasionally some friend would come over for what they now call a play date, or I’d go to their house. I spent my Saturdays and Sundays doing pretty much what I wanted. I walked in the woods, made mud pies, snowmen, skated, sledded, rode my bike, painted, drew, and collected rocks. I watched my father build our house from the ground up. I licked the bowl when my mother made a cake.

I’ve come to know many kids over the years. Some were friends of my own children or kids I met as a therapist or university counselor then they were barely out of childhood. Some became heavily involved in sports.

One girl told me she was a gymnast. I cringed. Gymnasts were made to do the very exercises that destroy young tendons, pushing bodily into deeper and deeper splits, bouncing tears into tissue that would never heal.

Another athlete told me about blisters. They were a constant burden but the athlete was trained to ignore them. Crying in pain was out, so was stopping the exercise regimen.

I had more than one ice skater or former skater among my patients. One described the horrendously absurd scrutiny her developing body was subjected to by her coach. She was made to exhale all the air in her lungs before being weighed in a deep pool. (This was before the discovery of simpler ways to determine body mass.) Another had to wear a brace when she got older because she’d twisted and worn down all her vertebrae.

Others told me they’d been advised to delay their first period by starving themselves. As adults, some suffer from osteoporosis and related diseases. Perfectionism. Anorexia. With them can come suicidal thoughts. Why? “I’m not perfect enough. “

I also knew kids who excelled at basketball or soccer. Their training was fierce enough to destroy ligaments and joints. The very talented ones were placed in leagues with older kids, making them more vulnerable to breaks and tears. One kid I knew was almost perpetually wrapped in some sort of cast or orthopedic bandage. Don’t show pain, keep playing, went the mantra. Some got drugs to increase their muscle mass — with disastrous health consequences.

What this amounts to is child slavery.

Yes, often the kids are glad to do it and some parents overtly push kids to succeed. Often, though, adults seem unaware of the message they’re sending.

People underestimate how a child responds when his parent’s eyes light up. They underestimate the power of the parental line, “That’s okay honey, you’ll do better next time” — the soothing reassurance that follows dreaded disappointment, if not despair, at having fallen short at something. For a child, those lit-up adult eyes are beacons. They make a child feel like they exist, and are loved. Kids will do anything to get that look. Not a word need be spoken.