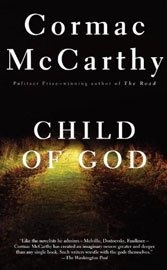 Cormac McCarthy is America’s paramount “medievalist,” a peculiar distinction since he’s writing about a country scripted from birth in noble and sentimental terms and one that came to be long after the Dark Ages yielded to enlightened thought. His ability to sketch out and populate an unlit American landscape by giving wide berth to its feral rusticity long ago sealed his place among the English language’s most important and transcendent stylists and made him a spokesman for what might be called frontier literature, a part literal and part abstract rendering of the American outland. For McCarthy, language is a character of uncontainable ferocity. He has an affinity for lunatic loners and their raunchy cravings.

This early novel puts one Lester Ballard in the depraved Appalachia of McCarthy’s mind. Dimwitted Ballard is a man-boy of 27 unacquainted with the annoyances of right and wrong and ready to fit arson, murder, and necrophilia into his otherwise laconic, happenstance-like days. His house auctioned off, his family lost to a Civil War-era time, friendship his antithesis, Ballard sulks filthily through the woods with “constrained truculence,” a gun-toting scavenger in search of shelter, amusement and women. He poaches and steals. He comes to dress in the clothes of the women he kills, finally resembling “a Gothic doll in ill-fit clothes.” A child of God, yes, but of an ironic one. In fact, Lester could be God’s Adam gone wrong, “a misplaced and loveless simian shape,” a scalp-carrying, cave-dwelling guerilla whose aptitude for survival is cause to write, of his character: “Some halt in the way of things seems to work here. See him.”

It is McCarthy appetite for wolfish sentences, teeth ever bared and at the ready, that makes the amoral Lester worthy of attention, if not compassion, his alienated musings those of a lesser man famous to himself alone. To some extent, “part-time ghoul” Lester is a trollish precursor to the author’s later and more focused Anton Chigurh, who appears in “No Country for Old Men.” This is a novel of serial ominousness in which, significantly, the only poetry passion knows is that of violation.