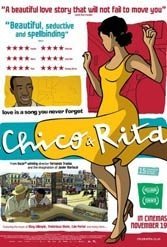 Directed by Spaniards Fernando Trueba and Javier Mariscal, “Chico & Rita” is an animated film that recounts an on-again, off-again love affair between two musicians, in the process offering a heavy critique of mid-20th-century culture and politics.

The story begins in pre-revolutionary Cuba — a world filled with jazz and brilliantly warm reds, yellows, greens, and blues. Chico (Eman Xor Ona), a talented piano player, gallivants about Havana with best friend Ramon and two American women. Drinking and dancing, they discover Rita (Limara Meneses), a beauty with a rich and gorgeous voice. Chico and Rita form a duo, win a contest, and produce a radio hit. Despite some initial resistance, the two soon become lovers. Although Chico and Rita are cartoons, they are sexy and sultry, and their desire for each other is palpable. But Chico has a history with women. When Rita sees him with one of his old flames, she assumes the worst and accepts an agent’s invitation to America, leaving Chico in Cuba.

Aspects of the film are like a traditional Latin bolero. Characters fall in love, and their love brings pain and sorrow. But there’s also social critique. Chico soon follows Rita to the U.S. and finds himself in New York, colder and greyer than his native Havana. Rita achieves musical and Hollywood success, and Chico tours with Dizzy Gillespie. Though they witness a world filled with glamour and fame (Marlon Brando and Humphrey Bogart make appearances), the characters still endure racism and political discrimination. Rita attends Hollywood parties and sings in the best hotels but can’t stay in them because of her Latino background.

Later, Ramon will frame Chico for drug trafficking, forcing his deportation. Chico can barely recognize post-revolutionary Cuba. When authorities confiscate his passport and bar him from playing jazz (a “capitalist” art), Chico resigns himself to a life of drinking and shoe-shining.

While parts of the story feel contrived (a group of young Americans, for example, rediscover Chico and invite him on a world tour where he reunites with Rita who had been waiting for him in a hotel room for 47 years), the film itself is beautifully rendered and ultimately tragic. The animation is rich and vibrant, the criticism poignant. It won best animated film at the 2010 European Film Awards and was nominated for an Oscar in the same category.

About the Author: Susannah Wexler