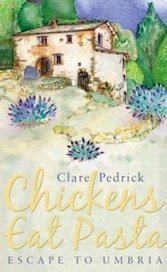 In 1995, director Christopher Monger made a touching pastoral film called “The Englishman Who Went Up a Hill But Came Down a Mountain,” a quirky story of life in rural Wales. In this delightful book, which has its own set of hills, valleys and quirks, Englishwoman Clare Pedrick tells a tender tale of falling in love with an Italian village, San Mamiliano, a broken-down house, and the man who will eventually become her husband. At age 26, Cambridge-educated reporter Pedrick felt “alone and numb with boredom at the prospect of a future which until recently had seemed to be just what I wanted.” Enter her great escape from England and newfound life in a medieval Umbrian village, which slowly transforms “alone and numb with boredom” into “member of an extended family” in a countryside filled with colorful characters (Pedrick in her roaming Fiat 500 is among them).

But the house that husband and wife (and children) finally settled into after a stretch in Rome was more wreck than house. This anecdote rich memoir explains how Pedrick & Co. came to love it, fix it up, and live in it — an event partly triggered by once having seen a video of chickens pecking at pasta in the local countryside. It’s a three-way love affair with country, home, and man.

Admittedly, the Italy she so beautifully portrays isn’t quite the same now as it was 25 years ago, but the sweet nostalgia of her serendipitous beginnings in Umbria and the pitfalls and pleasures of making a life in the hinterlands invites the reader to consider the power of a ruin — since in this case it’s the catalyst of Pedrick’s Italian transformation. Interspersed with flashes of partings, sadness, and whimsical decisions, this is the story of a life path changed in many and touching ways.