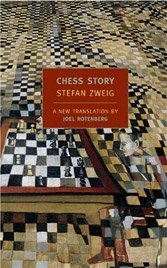 By Stefan Zweig, translated from the German by Joel Rotenberg

World chess champion Mirko Czentovic is a youthful Yugoslav dullard, the peasant son of a boatman who early on is discovered to have the gift of chess. Czentovic ‘s seemingly effortless absorption of moves, techniques and strategies has allowed him to cut a swathe through the ranks of more erudite players. But Czentovic has a singular shortcoming: he cannot visualize the board let alone the spirit of the moves. He operates only by rote (“He completely lacked the ability to situate the field of battle in the unlimited realm of the imagination.”) Opaque, arrogant and greedy, the taciturn world champion finds himself aboard a liner steaming from New York to Buenos Aires for a tour of Argentina. Also on the ship is an pedigreed Austrian, Dr. B., who once sought solace from isolation and Nazi interrogation by memorizing famous chess matches and playing them out in his head, to the point of mental exhaustion.

Zweig’s noteworthy Schachnovelle puts these two parable-laden men on a collision course, their ramming facilitated by the narrator, also Austrian, who becomes fascinated first by the Slavic chess prodigy (“… unable to write a correctly spelled sentence in any language”) and then by his nimble-minded, luminous compatriot, whom he meets while attempting to coax games from the greedy and condescending champion.

In less than 100 pages, Zweig (1881-1942), who finished the book just ahead of World War II, probes two currents of power. One is acquired by chance, is smugly unenlightened, and wholly dependent on the measured brutality of repetition; the other is a passionate reply to repression inspired by invention, divination, synthesis — but still vulnerable to coercion, if not sick with it. The climactic match between the two men pits rote against resourcefulness, scheme against vision, the officially anointed against the anonymous “cipher,” with all the attendant implications of Nazi ascendance.

For humanist Zweig the ending is proscribed, and devastating: it is the man of imagination who is compelled, if not determined, to capitulate. In 1942, Zweig and his wife, who had fled Nazi-annexed Austria, committed joint suicide in Petrópolis, near Rio de Janeiro.