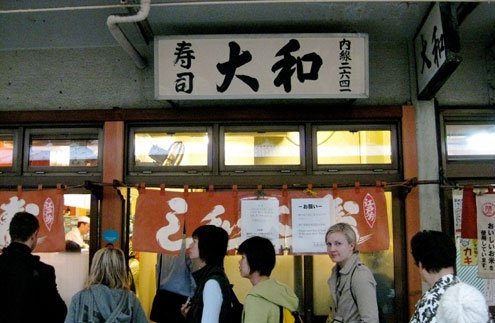 y first few days in Tokyo were spent in a jet-lagged haze, dotted with recurring scenes from “Lost in Translation.” In this Hollywood dream, I was the lone blonde head in a sea of suited salarymen sitting on the subway, my mind spinning from blinking neon signs and enormous, multi-storied video screens.

In the endless cycle of semi-consciousness, night blurred into day as I lay watching the sun roll up around 4:30 in the morning. When my alarm went off, I realized that my husband, Dave, had already gotten up and showered. It was time for breakfast.

The tuna auction at Tokyo’s Tsukiji fish market begins before dawn. When the two of us arrived sometime around 5:30 a.m., the sprawling market was already in full swing. While I was still rubbing sleep from my eyes, mechanized carts and forklifts barreled down narrow aisles between stalls, threatening to run over any distracted tourist who happened to step into their path. At the back of the market, auctioneers and bidders wearing jumpsuits and galoshes crowded the cavernous auction space. At their feet, giant frozen tuna carcasses were laid out on the slippery concrete floor.

In the crowded wholesale market stalls nearby, every imaginable creature from the sea was for sale — some 450 kinds of fish and seafood in all. In a daze, we wandered up and down the tight aisles, peering into Styrofoam boxes full of sea urchins, snails and octopus parts. After an hour of ogling fish, the only reasonable thing left to do was to eat some.

Joining the line outside Daiwa Sushi — yes, there was a line before 7 a.m. — my mind filled with thoughts of delicious, fatty tuna. In Italy, when people ask what I miss most about the U.S., the first thing that comes to mind — after family and friends, of course — is sushi. In truth, I miss a lot of foods that Italians have been slow to embrace — Mexican, Thai, Eastern Carolina-style barbecue — but my most vivid cravings almost always involve sushi.

Unfortunately for this picky eater, what I faced that morning was not the typical American platter of tuna, salmon and shrimp. As a rule, I prefer not to put things in my mouth that I can’t identify — particularly raw things that I can’t identify. Nevertheless, when sitting in a closet disguised as a sushi bar with the sushi chef smiling down at you as he places said unidentifiable object on your plate, you do things you would not otherwise do.

To start the set meal, two pieces of tuna — one fatty and one regular — were knee-tremblingly delicious. Other less delicious items were dutifully ingested along the way, but then came the sea urchin, which looked like some combination of tongue, innards and — ok, I’ll say it — poop. Needless to say, I didn’t eat the sea urchin.

After stuffing ourselves full of sushi, Dave decided that a passeggiata was in order. The Shinjuku Gyoen National Garden turned out to be the perfect place to take one. All around the park, the last of the spring cherry blossoms swirled to the ground in a delicate flurry of pink and white petals. On the wide lawns between clusters of cherry trees, picnickers enjoyed the ethereal scenery while photography hobbyists hunted for the most photogenic blossoms. In the background above the treetops, skyscrapers hovered Central Park-style — a constant reminder of the bustling streets outside the quiet park’s walls.

A few blocks away, on Shinjuku‘s throbbing streets, the garden’s contemplative beauty quickly gave way to an entirely different kind of sensory experience. Wandering past a string of arcades, we decided to try our hand at pachinko — a game that seemed to resemble pinball. Inside the multi-level pachinko parlor, it was all blinking, neon lights and deafening noise — yet the players seemed strangely comatose. Sitting silently, side by side in front of animated screens, they guided small metal balls into specific holes with only the slightest turn of the wrist. So there sat hundreds of people, row after row, floor upon floor, like old ladies playing the slots in Vegas. As I snapped a picture, no one bothered to look up. They just continued staring somberly at the lively cartoons dancing around on their screens.

Later that night, Dave and I met up with our friend Taylor for dinner, and asked him about the incomprehensible allure of pachinko. Despite having lived in Tokyo for years, he admitted that he didn’t understand it either. What he did understand — and what we soon did too — was how unbelievably delicious grilled chicken skin is.

Crammed around a low table in a small neighborhood restaurant in Nakameguro, Taylor schooled us in the glorious joy of grilled things on sticks — also known as yakitori. Small plates with skewered mushrooms, meatballs, pork, chilies, and crispy, greasy chicken skin appeared at our table. But this salty food quickly disappeared, as did large mugs of cold beer.

The following day, having finally regained a coherent sense of time and place, we saw sights and shopped. Looking back, many of the temples and gardens blur together, but the basement floor of the Isetan department store still stands out. Like most Japanese department stores, Isetan has an extensive food hall located in the basement. So when we stumbled off the escalator, dizzy with hunger, it felt like we had discovered paradise.

Spread out in every direction, the posh, sparkling counters looked like a beauty department, except instead of lipsticks and creams, the smiling employees were selling tempura and sushi.

Wandering the floor, we considered buying colorful sweets stuffed with red bean paste or some tonkatsu — breaded, deep-fried pork cutlets. We lingered at the Pierre Hermé counter, salivating over the neat rows of mini cakes, tarts and Parisian macarons. In the end, we settled on bento boxes stuffed full of rice, vegetables and nigiri, saving the macarons for our next trip to Paris.

Later that night, my earlier celluloid dreams returned as we relaxed with drinks at the New York Bar on the 52nd floor of the Park Hyatt. I half expected to find a mascara’d Bill Murray awaiting my arrival. Instead, we found only the spectacular view over Tokyo. So we sipped cocktails, listened to soft jazz music, and watched dusk settle around the city. An oasis in the sky, the bar slowly filled up as the sky grew darker and the tips of nearby skyscrapers blinked red.

As the brightly-lit night wore on, we found ourselves back on the streets of Shibuya, sucked into the constant human stream that flows past the towering video screens, smoky pachinko parlors, and tiny noodle shops. All around, it was like rush hour at midnight. But there’s no sense of urgency for the casual traveler. With the chaos and calm in perfect harmony, we floated in the crowd, eager to see where it might take us next.

There are direct flights from Milan Malpensa and Rome Fiumicino to Tokyo’s Narita International Airport, operated by Japan Air Lines and Alitalia. From other airports in Italy, connections can be made through many European hubs, including Helsinki, Paris and Frankfurt.

Narita International Airport is located 66 kilometers outside of Tokyo, and there are many different modes of transport that will get you into the city. The quickest is the JR Narita Express train. From Narita’s Terminal 2 to Tokyo Station, the trip takes 53 minutes and costs ¥2940. Trains depart about once an hour and stop at a handful of other stations – prices and travel times vary according to the destination. (More information).

Limousine buses (which are just buses, not limousines) from the airport may take a more direct route, as they make stops at a number of Tokyo hotels, though traffic can cause significant delays. Generally, the trip by bus takes between 90 minutes and two hours and costs about ¥3000. Tickets can be purchased at counters in the airport arrivals hall. See airport and limousine services.

To get around the city, the Tokyo Metro is magnificently clean, efficient and convenient.