Cheerful Money: Me, My Family, and the Last Days of Wasp Splendor 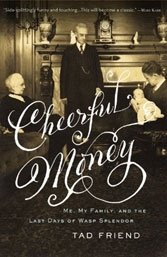 Universally described as “winsome,” “witty” or “like Wodehouse,” Tad Friend’s book instead brought to mind a scene in the BBC’s dramatization of the John Le Carrè books in which Alec Guinness plays spy George Smiley. Stepping in to a younger colleague’s flashy red sports car, Smiley/Guinness says “What an appalling little car!” What an appalling little book.

If it is wit, it is the college newspaper kind; hard-wrought cleverness that succumbs to its own weight. Supposedly mapping a path to maturity, Cheerful Money meanders into cul de sacs of unconnected and sometimes repeated anecdotes. Friend has the undergraduate’s conviction that banal experiences — Harvard, girlfriends, children, travel — are special because they are his.

The experiences of others, however, are annoying or inconvenient. It is heartbreaking (and embarrassing) when he repeatedly quotes long and desperate correspondence from women or when he rebuffs family members whose attempts at closeness — heartfelt letters, awkward touches — do not meet his approval. Who wouldn’t be stiff or timid before a judge so sure and so shallow?

The book also suffers from faulty logic: “Phenomenon A” happens in my family. My family is WASP, ergo “phenomenon A” is a WASP one. Stereotypes are a tricky business, but using blood as a basis for broader conclusions is inaccurate at best, offensive at worst.

Friend also implicitly accepts two fallacies perpetrated by outside observers of WASPs. The first is believing that the exterior trappings of an elite reveal something about general humanity; the second that if a culture’s emotional language is different and unfamiliar, and perhaps discreet, it is therefore emotionless. It’s Mozart vs. Mahler with a tone-deaf judge. Emotional relations are easy in no culture. But compassion is common to them all.