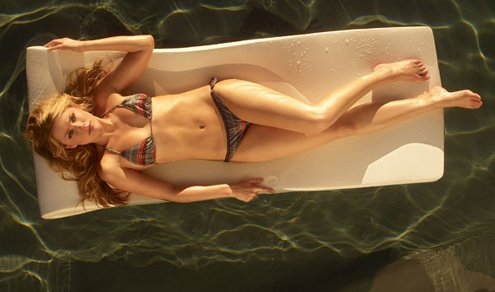 Amber is more than a little intimidating.
I

have a date with summer starlets. Let me count the ways. There’s Emmanuelle, a Jacqueline Bissett-like brunette. According to my reading material, Emmanuelle is a “natural beauty currently mounting a major assault on the silver screen.” On to Selma, a “pint-sized knockout” who is posed androgynously to remind the avid reader (I presume) that she once played both a “bi-curious debutante” and “an emasculating bride,” roles I missed.

Now meet Leslie, the first of the dream-machine blondes. Her coming “breakout” role is as a “political reporter who will do anything to get the scoop.” Sounds original.

There’s Liv, for example. She’s best in a “clingy white shirt” or when she exposes “incredibly, pouty, perfect lips.” These lips are not discussed in the interview. Instead, she pouts perfectly.

Zooey, meantime, is “the thinking man’s sex symbol of choice.” That she manages mind at body at once (think multi-tasking) qualifies her as “undeniably hot property” (think mortgage rates).

Now welcome Lenor, who speaks five languages. She can’t be the American “thinking man’s sex symbol” because she’s lamentably not American. She’ll soon be in a movie opposite a character called Pistolero, who by all accounts is a paragon of postmodern virtue. “She has information Pistolero wants, but she wants to have sex with him,” Lenor explains. Maybe “My Fair Lady”?

There’s also an interview (which is of course why I read).

This month’s hook-up is with a summer starlet called Amber — she “isn’t a household name just yet,” my reading advises, but her “celebrity is reaching a boiling point.”

To make a case for the scalding, the “fiery Texan” is first posed in front of a swimming pool and later in a La Perla bustier skirt. Below this she bravely wears “boy shorts,” which I can’t really explain because I once owned an unflattering pair. They hurt.

Does Amber carry a gun? This is a very thoughtful question.

No, Amber replies, she doesn’t. She does however own a .357 Magnum and a .38 special. “My dad says anything less would just piss someone off. I live in Los Angeles, and I’m a single girl. I’d be stupid not to have a gun.”

Speaking of sex, is she dating anyone?

No, but she plans to sleep with as many men as possible before she’s tied down. Just kidding! Silly you! “Amber is more than a little intimidating,” my reading material explains insightfully. “No wonder I’m single,” Amber offers in her defense. The curse of the luminous starlet.

Now let’s turn our attention to the “Cheat-O-Meter.”

After which you get:

— Lap dance from a stripper.

— Massage with a happy ending.

Spousal sibling sex (SSS), not surprisingly, tops the non-“In the Clear” list. SSS wakes the neighbors and alarms the dog. But Amber could have told you that. She attended Catholic school. “I’d rather deal with sleazy producers than sleazy priests any day.”

Next, The New Yorker.