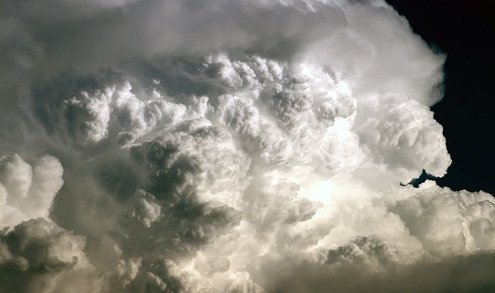 Pricip is cool... until it bears down.
C

olonel Bernaca got five minutes at the end of the evening news. “Now,” said the anchorman, “Colonel Bernaca of the air force with the weather,” after which came an electronic jingle. The colonel appeared in front of a rudimentary map dressed in a natty suit. He spoke of pressure (no one understood) and temperature (all listened attentively) and made it clear that while it might rain or snow all would be fine. He held a short pointer that looked like a prod. His “program” was called simply “Che tempo fa…” That was the extent of the weather forecast on Italian state television for two decades. Most didn’t even call it a forecast. It was just Colonel Bernaca.

I stopped watching television years ago so I can’t tell you much about the now. The upside is that I remember the then.

But my quaint stories don’t go far with my American lawyer friend who swears by the Weather Channel and is easily smitten by pressures high and low. I once called him Mr. Front to lighten the mood but he ignored me in favor of a breaking down the charms of a Midwest storm. “We’re getting weather, Chris,” he sighed, farmer-like. “It’s all about weather.” When Hurricane Katrina struck — an environmental orgasm of sorts — he vaulted past the foreplay. “Force five, force five!” he wailed, sounding like the captain of a leaky starship defending himself from moist Klingons.

Another friend, a fellow journalist in Washington, has been addicted to the Weather Channel for years. This led to speech patterns in the form of weather hints. “My pressure’s falling,” he’d say after a bad date, convinced he’d never have a good one. “I’m seeing counterclockwise” was code for “I want to leave, now.” Other times he’d just bob his head and mutter “Precip,” shorthand for seasonal melancholy.

My first exposure to the importance of barometric chitchat came in the mid-1980s when an editor at my newspaper greeted me daily with “How’s your weather?” I smiled wanly at first. My dismissal produced an unsettling scowl so I changed tack. “Sunny and warm,” I’d reply cheerfully. Or, “Hail-like.” When I finally quit I wanted to say “equatorial” to her face but lost my nerve.

Americans adore whiffs of calamity, followed by blame, reassurance, and a hefty supply of rescued pets, more or less in that order. They can even adore calamity itself so long as it has awesome images and the calamity-viewers are not in the line of the precip, whatever form it takes. Borrowing someone else’s nasty is a hormonal shot, thunder on loan. Infatuation with low pressure is vicarious sex.

Which makes the Weather Channel an obscure form of urban voyeurism. Circles, swells, and columns of wind-water are public enough to stir all-important predictions and the gossipy anxiety that results. Natural terrorism is good fun. Unless you’re in Oklahoma and the incoming coil wants to eat your neighborhood.

Last year, my lawyer friend showed me his new hand-held device. Not only could it call, email, take pictures and scroll the latest news, it also pimped for weather maps. He tapped the tiny screen. “I can track all the storms now,” he told me. “No way low pressure is getting the better of me. Not any more.” To the chagrin of low pressure no doubt, though it keeps on coming.

My journalist friend is mellower. He now watches the Weather Channel only when he comes home from work, combing meteorological faces for hotties. “Pretty nice one in California,” he says. “Lots of troughs.” A trough could be a thong. “See that low pressure thingy over West Virginia?” I nod. “That’s packing a punch, Chris. That’s packing a punch.” One day I suspect he’ll marry a punch or a thingy, to then cheat on it with an out-of-state typhoon.

As for Colonel Bernacca, he was promoted to general, retired from the military, did some TV ads, and died in 1993. He had a small metrological station named after him. Even an association. But never a hurricane. The latest Italian weather forecasters are twenty-something women dressed like Daiquiris. Meanwhile “Che tempo fa…” of 2008 couldn’t be more remote from the weather report that made it famous. It’s a political parody show.