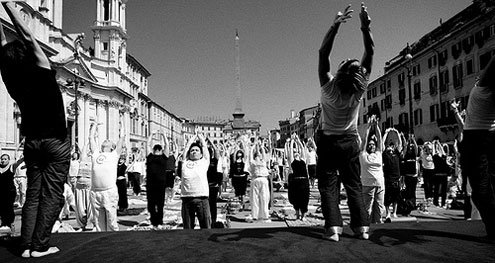 It all depends on the orders you get.
A

s bikini season approaches, I decided to get off my lazy butt just like every other Italian and do something about it. I recently took up weekend running in Rome’s Villa Ada and the last two months have been going quite well. I’m proud to admit that I’m actually consistent. And I’m not usually consistent at anything except at being inconsistent.

But I decided that the running alone just wasn’t going to cut it. I needed to step it up a notch. Since springtime gym promotions spring up like funghi, I debated a membership. One promotion came from a megamall-style gym that had just opened near my apartment.

You’ve heard of Virgin Airlines, Virgin Mobile and Virgin Radio? Well, now there’s the Virgin Active palestra (official slogan, in English: “Life is more fun when you move.”). The national chain styles itself as a gym to end all gyms, Italy’s “It girl” hub. It offers tutto and more: swimming pools, several floors of weight rooms, saunas, aerobic classrooms, and a centro benessere, or wellness center. Fighetti members only.

I decided to drop by the front office and pick up information on membership, prices, classes — the whole nine yards. Which put me face-to-face with the behind-the-counter staff. Let’s just say they didn’t exactly look like gym material. I felt more like I was looking at my doorman or my pizza delivery guy. (Note to Virgin Active gym marketing: What’s up front doesn’t exactly inspire fitness.) All in all, the place felt more like a worn out discoteca than a workout spot.

But once back to my infamous weekend runs, I stumbled on something interesting — “Boot Camp.”

As I was doing laps around the Villa Ada lake, I noticed a group of people (mostly women, might I add) engaged in military exercises given by a guy I’ll call Sergeant Figo. Back in Miami, I had enlisted in a similar class. It was fun and tiring but the results were rewarding.

I wanted to find out more about the Rome Boot Camp but was too afraid to interrupt. Turns out I didn’t have to. One day, Sergeant Figo marched right up to one of my friends while she was on her morning run. He kissed her on both cheeks, and introduced himself. He said he was impressed by her running and invited her to train with him.

Seems the Sarge was looking for more recruits. The first class was free, he said, and that got me going. When I spread word about the free introductory class, other friends expressed interest. So I decided to call the Sarge to know more and find out if he was okay with more troops.

“Cerrtooo,” he said on the phone. That’s a Rome yes.

He told me to check out his Facebook page for more on the classes. As I scrolled down, I noticed he had some 500 friends, most of whom were his friends and, I imagine, had also attended Boot Camp.

There were all sorts of flirty messages on his wall. From “Ciao Caro, you make my body sore” to “Look at my body.” I got the feeling that these women were more interested in Sergeant Figo’s bed-camp.

Only eight of use showed up for Sergeant Figo’s first class (all women) on a dreary, rainy day. All were in their mid-40s to early 50s except for my group. The exercises were a bit tough… until he ordered us to rotate our hips in a sexual motion. “Move that bacino, yeah! Che riccccoo!” he shouted. “Move your hips! Oh yeah, that’s delicious!”

The giggles started there.

I went back to running.