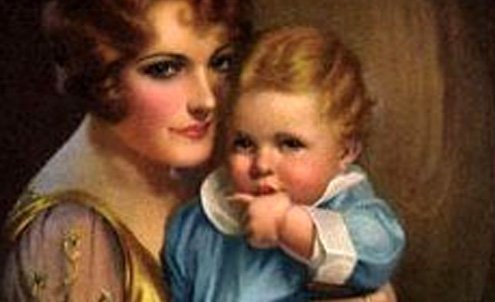 Here was her bambolotto della mamma.
I

spent the Easter holidays Fabio’s family and friends. It was a weekend of laughter, food and drink. And the drinks overflowed into story-telling.

Fabio’s mom was on point as always. A few glasses of wine and she’s center stage — a showman, er showoman. She pulled Fabio close to her and began the ritual performance.

Here we go again, I thought. How many times had I heard this? I’d realized I’d lost track long ago.

Then came the predictable rhetorical question, directed at me: “You do realize how beautiful my son is, don’t you?”

Everyone chuckled on cue.

Which is about the time I felt like quipping, “Lady, um duh, I go to bed with him every night and wake up beside him every morning.”

But no, I spoon-fed her compliments she expected. It’s the only way to keep her in check. “Certo che é bello,” I replied. “He looks like a soccer player.”

She beamed. Here was her bambolotto della mamma.

It was nauseating. I was briefly embarrassed for Fabio. I’d be mortified if my mom behaved this way in a group.

But Fabio (though a little flushed) was unbothered. Maybe deep down he found it flattering that a mother could make a 35-year-old seem five.

It’s cultural, he insisted aftereward. Mothers are hardwired to love their children, whether boys or girls, but a son lives in la mamma‘s palace. Age is irrelevant. So is maturity. La Mamma is the unconditional protector of a son’s life, a blanket and a sponge. No other woman can manifest or copy that kind of love. Or so a mother thinks.

“Fabiolino mio has always needed extra love and comforting,” she continued. “We made sure he had everything. Even when he left for college we ensured his sister would take care of him. Then when his sister moved out of the house, we worried how Fabio would manage.”

But she recovered. He’d found Nicole, “Who gives our Fabio a lot of coccole.” Then, turning to me: “She may be Americana, but she understands our Italian principles and family values.”

I rolled my eyes.

As if Americans lack similar values. She’s obviously never seen the “Brady Bunch” or “Leave it to Beaver.”

Fabio probed me with a devilish smile and smirked. He was clearly soaking all this up. Che mammone!

For life, ladies and gentlemen. For life.