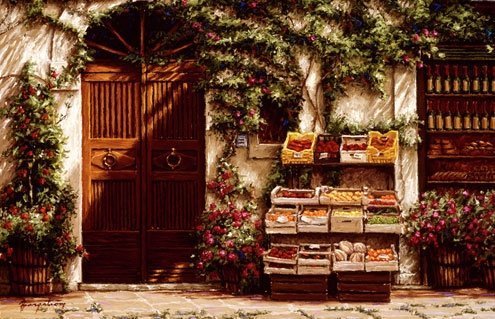 Rural life can be lovely and charming, even idyllic, but it also comes with downsides.
A

couple of weeks ago, my pitiful green thumb and negligent watering habits sounded the death knell for my hydrangeas, and I consoled myself in gossip.

There is nothing more satisfying about living in a small country town than the free flowing stream of gossip. Sure enough, once a week, month or year, the disapproving tongues of Manciano’s crones will flap at your expensive, but for the rest of the time, you’re free to gasp and groan, laugh at and judge the people you are otherwise perfectly nice to at the Saturday market.

My mother-in-law is the queen of gossip. She’s the sort of born-and-bred local who swears she minds her own business while rattling off 30 years of hearsay in the same breath. I once watched her listen to two women dance around the topic of a daughter’s infidelity for 20 minutes before blurting out, “So she slept with someone else, didn’t she?” The ensuing indignation at her bluntness was legendary, considering the two women concerned were salaciously renowned for their own long-time infidelity.

My mother-in-law had heard rumors that a big budget movie was going to be shot in Manciano in the coming months. My neck of country Tuscany is no stranger to the silver screen. This year’s Cannes Grand Prix winning film, “Le meraviglie,” was shot down the road in picturesque Sovana and Sorano. “Harry Potter’s” Alan Rickman has a holiday house in Campagnatico, and our rural bliss and idyllic hot springs have inspired scores of television specials.

But this sliver of news was something to celebrate. Maria Grazia Cucinotta, the Italian siren who blew herself up in the opening scene of James Bond film, “The World is Not Enough,” was said to be starring in the film along with a host of other well-known native stars.

As it turns out, a local, who, after years of seeking fame in Rome, had decided to pen the quintessential look-how-at-fantastic-country-life-is screenplay about his native town. In a storyline that I thought had truly been done to death, a young boy escapes the hard-knock city life and begrudgingly learns that the grass really is greener in the countryside.

Che cavolata! Anybody who has ever lived in a country town post the Internet and cable television will realize that it’s never that simple. It has been almost 10 years since I first began dividing my time between Melbourne’s shop-lined streets and Manciano’s sheep-lined streets, and I still can’t give you a straight answer on which is better.

I have an expat friend who scoffs every time I see him. He’s a high-flying city dweller who has the extremely annoying habit of insulting the Maremma’s lack of innovation to my face as if I am worldly accomplice who, not being a native of Manciano, is in utter agreement.

I’m not. And if anyone is going to trash my town, it’ll be me.

There are days when I think, “What have I done to my future children?” I left a city where they would have had every opportunity. A hundred schools and afternoon sports to choose from, the very best in modern culture and multiculturalism.

Heck I did something worse. I left a city where they would have had every opportunity and went back to the small Italian country lifestyle that my grandparents left so their children, grandchildren and great grandchildren would have a better future. I undid almost 40 years of familial betterment in one swoop.

There is a sadness to country life in Tuscany that the tourist or city slicker expat never sees: the unemployment, lack of opportunities and utter boredom. We don’t have a swimming pool or a ballet school and our cinema plays the same movie three times a week for a month. I teach a class where five out of six of the boys want to be mechanics and neither they, nor their female classmates, have any desire to explore the world, let alone leave their hometown.

We are 90 minutes from Rome, but we might as well be a lifetime away.

No parent or slightly paranoid 20-something who has far too much time on her hands to think about her unborn children wants said children to have less opportunities than they did.

And yet I hope they will also appreciate how comforting it is to know your neighbors and your greengrocer. To grow up, go to school, get into trouble and go out with the same group of children year after year.

I’ve only been a small-town expat for a short time, but I understand the beauty of being surrounded by people you have known for a lifetime. Venice has its Carnivale, but we have the Sagra della Lumaca, del Agnello, delle Fragole, food festivals that haven’t changed in half a century, and yet remain eagerly anticipated annual gatherings.

I like not being able to walk down the street without having to say hello to half a dozen people, and I love hearing a play-by-play of the latest gossip about them while I’m at it.

Country Tuscany life might not be a Frances Mayes novel, but if you asked me tomorrow where I’d rather be, I honestly couldn’t tell you.