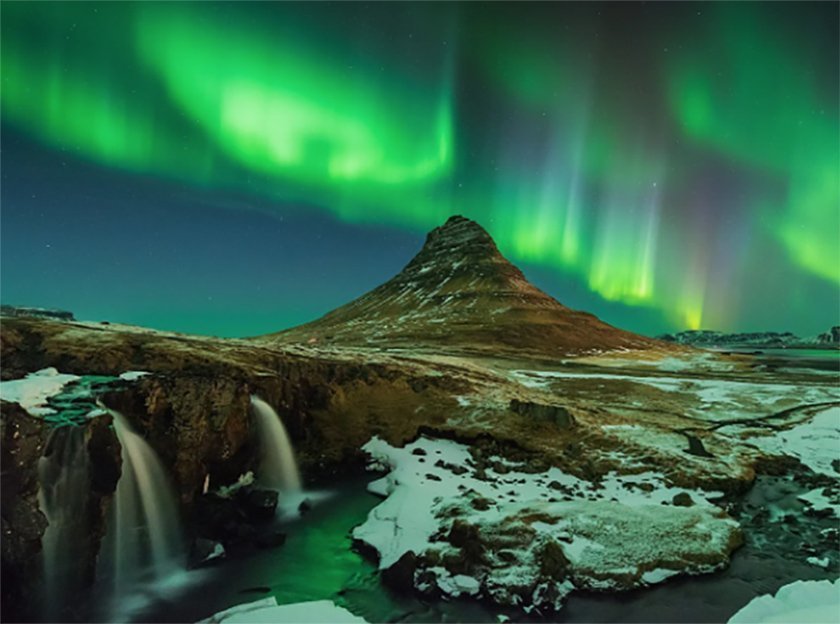 The Northern Lights from Iceland: a winter sight for the ages, weather permitting.
W

e’d talked many times about seeing the Northern Lights together. But we’d had a few spats of late — it was 2017— and after returning from a whirlwind trip to Copenhagen, Amsterdam, Bruges, and Brussels things felt rockier than ever. Maybe it was time to take some time off from each other, at least through Thanksgiving.

I suggested we maybe go to Paris over Christmas. We could take it from there.

That didn’t work. A few days later she told me she’d already made plans. Even though she was low on cash, she’d soon be off to London with a girlfriend, with a side trip to Reykjavik to see the Northern Lights.

How could that be? I thought, despite any problems we might be having, Iceland and the Northern Lights were ours to see as a couple.

Maybe she hadn’t made it clear we were no longer together. Or maybe I’d missed that memo.

I swung into action immediately. No way she would see the Northern Lights before I did. I booked a December flight to Paris with a three-day layover in Iceland. She’d be leaving a day before me, but she’d only be in Iceland for a night. I could only hope the weather wouldn’t oblige her. Ideal viewing conditions demand you jump through hoops — in winter. First, you must first travel above the Arctic Circle when nights are long and bitterly cold. The hard part is waiting for a clear night, never a sure thing.

No way she would see the Northern Lights before I did.

I consulted various meteorological timetables and figured my chances were good.

Once I landed in Reykjavik, I headed for my first stop, the Blue Lagoon luxury spa. I touched down at 8 a.m., and drove my rental SUV compact along empty highways through the jet-black morning, headed to the middle-of-nowhere, or so it seemed. Just as I got there it began snowing.

I checked in and decided to immediately indulge in the hot mineral waters, mud mask included. As the sun finally rose above a volcanic landscape, I sipped a beer. All around me people swam in and out of the swirling mist, some in white-faced mud masks, others holding their cell phones in waterproof cases, taking selfies. I felt buoyant.

I still had some time to kill before my AirBnB room would be emptied out, so I drove south, watching the sun rise out of the Arctic Sea and over the landscape of Iceland’s southern peninsula. I passed desolate corrugated-sided shacks on the way to the fishing village called Grindavík. I then drove along the coast a bit and decided to go north, into the mountains. I climbed through rugged terrain past Kleifarvatn Lake, then back onto the main road that led into Reykjavik.

The day was overcast and sticky snowflakes fell, not exactly ideal for a first-night light show.

After settling into my room, I wandered around until, at 4:30 p.m., darkness descended around me. I made my way downtown among buildings made of wood or corrugated iron. Shops surrounded a square full of skaters, festooned with lights and garlands — just like the ones my ex-girlfriend had posted on Facebook the day before. There were hot dog and cocoa stands, and a cozy coffee shop with a roaring fire.

I rested and had some cocoa before heading down the main drag to the center of town. Reykjavik seemed to me not a city but a village, at least at first. But as I tramped from one end of town to the other, I came to appreciate its districts and bustling nightlife. I found a decent restaurant for dinner, and later a good tavern for some drinks to fortify myself for the walk back to my room.

The next morning I woke to total darkness. I found some coffee in the communal kitchen and focused on that day’s goal: to use the few daylight hours I had to drive the entire Golden Circle.

I bought some provisions from a restaurant in the marina district — coffee and salmon sandwiches from Kaffivagninn, supposedly one of the oldest restaurants in town.

Shops surrounded a square full of skaters, festooned with lights and garlands.

From there I headed up to Thingvellir National Park and Öxarárfoss falls, but the roads in were inaccessible so I kept traveling, past the village of Laugarvatn with its year-round thermal lake. I continued to Strokkur, a spectacular and popular tourist site with stunning geysers. I then trekked to Gullfoss, a remarkable 32-meter wide frozen waterfall, before heading south to see the Kerid Crater, a dormant volcano filled with frozen water.

Golden Circle mission accomplished, and just as the sun began setting. The feeling was that of living on an alien planet with a fickle sun.

Back in Reykjavik, I noticed a steady stream of cars heading west out of the city and into the darkness. I followed the cars up the Seltjarnarnes peninsula until the road ended in a circular parking lot with a trailhead leading out onto a spit of land, which in turn led to Grotta Island Lighthouse.

When I got out of my SUV, I looked west and gasped.

Exploding over the lighthouse was the dancing green light show I’d hoped to see. I stood mesmerized with the other fortunate people who’d shared a silent secret and made their way out here. I could not speak.

It was too rare a display of something words cannot describe. It suddenly didn’t matter to me who had seen it first. All that seemed suddenly trivial. Beauty is its own reward, and the sight something so sacred that deserves to be shared — and trust me, I did.