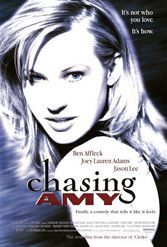 Holden (Ben Affleck) and Banky (Jason Lee) are comic book illustrators and lifelong friends. Their wacky strip “Bluntman and Chronic,” is what makes them tick. In comes Alyssa (Joey Lauren Adams), another illustrator. Holden is smitten; Banky finds her intriguing. As a romantic comedy, the movie follows Kevin Smith’s eccentric protocols… until Holden discovers that Alyssa is gay.

Smith creates an intriguing triangle while Adams — an actress of singular character — flits between being unbearably attractive and simply unbearable. Silent Bob, Smith’s alter ego, makes his inevitable appearance. Smith is at his best when he dedicates himself obsessively to his characters, their oddities and lunacies, their commitments and affections. Affleck, Lee, and Adams are likeable. This is a true and sometimes aching film in which declarations actually mean something.