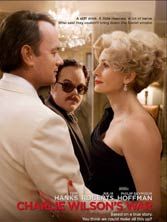 In this cardboard piece of well-intentioned liberalism, Tom Hanks plays Texas Congressman Charles Wilson, a hedonistic legislator (he served from 1973 to 1997) who becomes convinced that Afghanistan’s mujahideen need more bucks in their 1980s fight against the invading Soviets. He conspires with roguish CIA hack Gust Avrakatos (Philip Seymour Hoffman, wonderful as ever) and Texas Christian dowager Joanne Herring (Julia Roberts, looking every bit like a former Miss Cotton Bowl) to funnel necessary subcommittee millions through Pakistan to assist the rebels against the trash-talking Russkies. “Syriana” it ain’t.

Director Mike Nichols, who rarely ventures into political filmmaking (and shouldn’t), never gets a handle on his characters or on history. The sexually-distracted Wilson (he has knock-out aides, “Charlie’s Angels”-style) is portrayed as a caring politician who hates communists and mutilated kids (Hanks is Hanks). The unlikely troika succeeds of course. The CIA did covertly assist the mujahideen (Osama bin Laden among them), only to lose interest when the Soviets pulled out. Cometh anti-Americanism, radical Islam, 9/11, Iraq, and so on, or so the narrative implies. Never mind that the Soviets made their ill-advised move to keep Afghanistan out of the burgeoning Khomeini camp.

“The ball keeps on bouncing,” Wilson warns his congressional colleagues, begging for help in fixing the aftermath. But shucks if his fellow politicians can tell Afghanistan from Antigua. Moral of the story? “We fucked up the endgame.” Ring a bell?