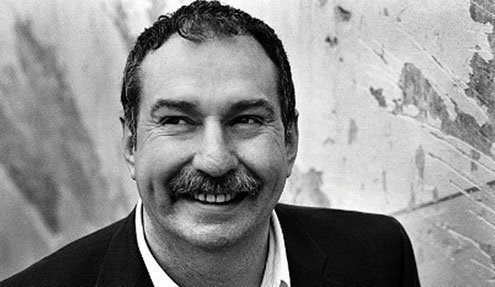 Lambert: "I was an economic migrant."

British writer Charles Lambert began his Italian odyssey in 1976, settling in Rome in 1982 after brief stints in Milan, Turin and Modena. He has since lived in Italy almost uninterrupted, working as a teacher, editor, journalist, translator and, briefly, as kitchen hand.

An award-winning author of short stories, Lambert published his debut novel, “Little Monsters,” in 2008. Set in Britain of the 1960s and present-day Italy, Lambert developed the narrative through the eyes of a female protagonist, Carol Foxe, whose emotional and literal displacement the novel follows. The Daily Mail called the novel “beautifully written and crafted, and more compelling than many thrillers.”

His next novel, “Any Human Face,” published in May 2010, was billed as “half-thriller, half-love story.” It follows a second-hand bookstore owner in Rome who stumbles on a box of 30-year-old police photographs, setting off a chain reaction of political and personal events. The Guardian praised its “atmosphere and psychological insight.”

Lambert says living in both the UK and Italy has helped him transmit a “specific sense of belonging and not belonging to a country” that longtime expatriates can identify and associate with. “I’m interested in borderline situations, of being absorbed by a world while standing outside it as an observer,” he says. Openly gay, he believes the “involvement and detachment” intrinsic to writing can act as metaphorical “shorthand for the way a gay man might relate to a non-gay world.”

Lambert, 56, now lives in Fondi, a seacoast Lazio town located almost midway between Rome and Naples, where he can often be found at the Bar Castello talking to friends and people-watching. Patricia Fogarty talked to Lambert. These are excerpts from their conversation.

What made you move to Italy in the first place?

I suppose I was an economic migrant. I’d spent a year after leaving Cambridge in a series of dead-end secretarial jobs in London, so when a friend of mine with contacts in a Milan language school suggested we both apply to work there I jumped at the chance.

How does the double lens of having lived in the UK and Italy shape your work?

First off, it’s led me to review the whole idea of “patria” and “expatriate.” I’ve always been uncomfortable about the notion of being an expat, partly because I don’t feel the kind of attachment to the country in which I was born that would make me consider it my patria, a term that for anyone of my post-war generation is probably terminally tainted by echoes of national socialism and, of course, Italian fascism. And partly because “ex” suggests something negative, as though an expat has been deprived of something and is incomplete as a result. I’ve always seen the chance to live and work — as fully as possible — in a second country as a sort of enrichment, rather than deprivation, and I hope my writing shows that.

On the other hand, the fact that I don’t have — and am deeply suspicious of — a strong sense of or attachment to patria has certainly fed into the character of Carol Foxe, and indeed, one of the central themes of “Little Monsters”: what happens when people are displaced against their will, whether by war, poverty or domestic violence.

Foxe starts the novel with the line, “When I was thirteen, my father killed my mother.” Why this shocker opening?

Well, I dreamt it — or, at least, I woke up one night with the line in my head and scribbled it down in my notebook, only to find it there the next morning. I was shocked too. But I was also curious to see what a first line like that might lead to, and what might lie behind it. The rest of the story grew from that.

Why did you fix on such very different refugees as your compelling central figures?

With hindsight I could say that right from the start I wanted to represent three different types of deracination, but the truth is that I started with Carol, as yet unsexed. I added her Polish refugee “uncle” [Josef] because the pub on which the Mermaid of the book is loosely based — a pub I knew as a child — had a Polish refugee landlady.

Then I introduced Kakuna [a refugee character] because I wanted to provide a counterpoint to Carol. And I was attracted by the idea of this girl’s emergence from the Adriatic Sea, paralleling the local English tale of a mermaid of emerging from the pond near the pub.

It was only as I wrote the novel that I began to see it as having a sort of thesis. If I’d realized that earlier I might not have been able to write the book at all. It’s important to me that the work comes from character and situation and a sort of narrative serendipity, rather than some imposed and external world view.

It is fair to say that I was concerned about the way displaced people — refugees of all sorts — are treated in our societies. I started to write the novel some years ago now, when the situation in the UK was fairly tense and that in Italy far less so than it is now — and that certainly informed the novel.

Where did you get such detailed knowledge of Italian refugee detention centers, where Carol works?

I winged it! Basically, I incorporated everything I’d managed to glean from newspaper and TV reports and then adapted what I had to suit my needs, using my imagination to fill in any gaps. As I say, I was more interested in the emotional effects of displacement than the politics of it.

Rather unusually, this story’s end brings no standard closure. Why is that?

Real lives don’t have closure, of course, and the novel recognizes this while still providing closure of a sort, although, as you rightly say, of an unusual sort. And at this point I should confess that I’m prouder of the novel’s final two pages and, above all, of its final lines, which were hard-won, than I am of its opening one, which was a gift.

Does “Any Human Face,” which is set in Rome, have any connections to “Little Monsters”?

In some ways, yes. Like the first book, it has a strong sense of place, in this case no longer rural England and southern Italy, but Rome. “Any Human Face” is the first of a trilogy set in the city, which plays an essential role in all three books. The central character in “Any Human Face” is a second-hand bookseller called Andrew Caruso. He was born and lives in Rome, but is half-Scottish, and feels that he only half-belongs as a result. He’s unrooted, rather than uprooted.

He’s also the victim, as the characters in “Little Monsters” are, of forces beyond his control, powerful forces that he unwittingly unleashes.

The lives of Carol, [her husband] Jozef and Kakuna are profoundly affected by domestic violence or war, whereas Andrew stumbles into the sort of corruption and conspiracy that has characterized one aspect of Rome since the days of Caesar and the Borgia popes.