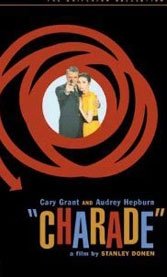 Question: How do you make a classy thriller without sweating the schematics? Answer: Parachute in Audrey Hepburn and Cary Grant. Regina (“Reggie”) Lampert returns to Paris from a Swiss ski trip to discover that her husband Charles was mysteriously murdered while trying to flee the country. The CIA, courtesy of spook Hamilton Bartholomew (Walter Matthau), explains that Charles (whom she was about to divorce) had embezzled from the good guys in World War II, hence his miserable fate. Now, Washington wants the money back. But who has it?

With Reggie in distress, enter quirky Peter Joshua (Grant), a skiing acquaintance who gamely offers to straighten out the mess, or try. It certainly needs straightening when Charles’ one-time associates, including one “Tex” Panthollow (no, you can’t borrow the name), pounce for the missing cash.

This is a things-are-not-what-they-seem-to-be caper with Paris as a principal actor. Director Stanley Donen (“Singin’ in the Rain”) sits back and luxuriates as Grant and Hepburn perform world-class flirting, a lost art. Grant, then 58, and Hepburn, 33, effortlessly merge style, steel and laughs, dishing out romantic repartee from another era. Reggie, while standing with Peter under Notre Dame: “Any minute now we could be assassinated. Would you do anything like that?” Peter: “What, assassinate someone?” Reggie: “No, swing down from there on a rope to save the woman you love…”

Here’s once-upon-a-time strawberry sherbet between stars who are gone with the wind. A fantastic Henry Mancini score supplements the Parisian mood.