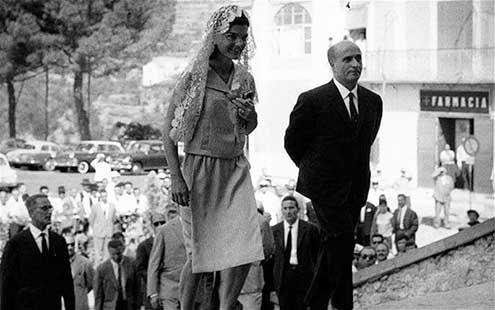 Jackie Kennedy in Ravello during the summer of 1962.
I

am in the running to become Manciano’s First Lady. I did not coin the term. I was told as much in the supermarket a couple of days ago.

Yes, Giulio’s lifelong quest to become the next Matteo Renzi has kicked into second gear as he successfully edged out the wild boar in a checkered shirt that is our current mayor and named himself candidate for the left-leaning Partito Democratico. That in itself is an achievement for a man who was once so into Silvio Berlusconi, he’d run out of the room screaming any time anyone tried to criticize him.

The battle to become PD’s presumptive nominee was hard fought. A lot of people believe my husband is an insufferable know-it-all who paradoxically knows nothing about country life and even less about our national pastimes, shooting stuff — aka hunting — and hanging out by the store that sells everything you need to shoot stuff.

Those people wanted another five years of the wild boar in ill-fitting jeans. What they got was a man who considers “House of Cards” his personal political playbook and would probably push someone in front of a train if only we had a train station… spoiler alert.

As for me, I voted in all my local council elections back home in Australia to avoid getting a $100 fine. I never bothered to check who won and based all my decision around who I thought looked the least like a sex offender.

My competition in the First Lady stakes is doing her bit by calling people one by one and encouraging them to vote for her husband. She’s a perfectly coiffed bleach blonde Jackie Kennedy on steroids. She’s a broken transistor radio. If you’re unfortunate enough to be within range, all you hear is praise for her husband and she would rip out my hair if it would improve her chances.

I’d like to pretend I’m that committed to the cause, but I know I’m generationally apathetic and so disengaged from country life that most people aren’t even sure I exist. I’m not so much Jackie Kennedy as Big Foot, coming out of my cave on rare occasions to stock up on meat and butter, bypassing the fruit aisle with my hair smeared across my make-up-less face and a pair of sweatpants encrusted with Vegemite and peanut butter.

I imagine a lot of people think Giulio is married to a Real Doll or that he spends his evenings dancing in front of the window with a mop in a wig a la “Home Alone.” It makes me feel a whole lot more sympathetic for the old lady who welcomed me into her home when I first arrived in Manciano. She has since descended into madness and recently called the town council to see if the mayor would buy her a new oven. She said she was old and without one, she would starve and the blood would be on the mayor’s hands. I imagine I’m not too far from such reclusion-induced insanity — except if my husband does win, I’ll be calling him and he better buy me a bloody new oven.

There is no other way to say it. I do not deserve the title of presumptive First Lady.

There is only one woman in my husband’s life that deserves that title and if you’re an Italian man’s wife, you know where this is going. That title belongs to my mother-in-law.

She can listen to Giulio share the same campaign story a million times without rolling her eyes. She can tell complete strangers that he saved the hot springs, balanced the town budget, reseeded the soccer pitch and invented electricity. The last one is not a lie. It’s an alternative fact. And she wholeheartedly believes he is the smartest and most attractive man in the entire county.

She is particularly fervent on that last point and takes great pains each day to tell me about all the mid-40-to-50-year-old women who plan on voting for my husband just because they want to tap him.

She shakes her head and guffaws good-naturedly, reminding me that if I were ever to leave him, he would be positively drowning in woman parts.

Perhaps I should be offended? My mother-in-law seems genuinely chuffed over the idea of infidelity in exchange for votes, but I am made of sterner stuff. My grandmother often spoke fondly to us of my father’s ex-girlfriends as if trying to make it clear that we shouldn’t have settled on the woman who gave birth to us.

Instead, I’m mildly frustrated because I’m currently working on the theory that my husband is the reincarnation of the Rain Man and that any woman who coveted him, would return him on the first bus back into town.

When I shared this theory with mother-in-law, she shook her head and guffawed good-naturedly once more. I was almost within stabbing distance when I remembered, WWJD, What Would Jackie Do?

Now bring me my pearls!