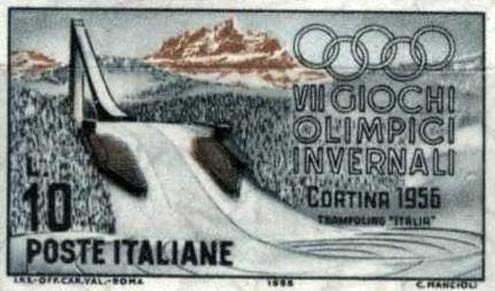 Commemorative stamp for the 1956 Winter Olympics in Cortina.
F

or 18 years, when Carnival approached, I’d load the car with children (husband/father would come later), skis, bed linens, sleds and a decent teapot that the vacation rental in Cortina d’Ampezzo in Italy’s Dolomites didn’t provide.

We had road music — CCR’s “Bad Moon Rising,” Janis Joplin’s “Me and Bobby McGee,” or real bad ZZ Top — and a full tank of gas. Jack Kerouac’s shackles couldn’t have slipped away as fast as ours.

Our car was Queen of the Autostrada. Big. Blue. German. When she hit 160 kph, nothing stopped her. She sped through Italy’s busy little northeast: Brescia, Verona, Treviso. She slowed just a little Venice to make way for trucks barreling toward Turkey or Bulgaria. She slowed again to slalom through crumbling villages clinging to rocky Dolomite slopes. Finally the Queen would blast onto the straightaway in the smiling valley formed by the peaks of the Tofane, Faloria and Cristallo. We were in Cortina. Ahead were two, sometimes three, weeks of freedom from undershirts, overheated schoolrooms and daily Milan life.

The Settimana Bianca, or Italian spring ski vacation in whatever bit of Alps is nearest — St. Moritz for Milan, Val Badia and Cortina for the Veneto — is the most bourgeois of Italian rituals. How strange and liberating to find that despite its provincial rules and hierarchies Cortina was more tolerant of certain American parts of me than Milan. There, a forgotten self could ski fast and enjoy a grappa before a last run in the setting sun. The common language of sun, snow and fresh air learned in Wisconsin, Vermont or Colorado became a bridge to people who hadn’t gone farther than the slopes of Cortina. Communication gaps that could turn Milan dinner parties into a battleground disappeared into passionate discussions over where to ski the following day.

We (along with the family that shared our idyll) eschewed fancier apartments for a ramshackle villa that devoured heating fuel. Yellowing photos of ancestors in baggy ski-pants recalled Cortina’s 1956 Olympics heyday.

The passing weeks were punctuated with fathers’ weekend visits. For two days we’d have to dress up and dine out with the industrial and professional cream of Veneto society. Over prosecco and homemade potato chips in the Hotel Posta’s bar, some of the communication gaps often reopened.

But on Sunday evenings, with fathers and husbands gone, we resumed our routine; up early for ski-school, picnic lunch, afternoon sledding followed by merenda, homework, dinner and welcome bed.

Year in, year out, the background changed as little as the routine. Every year brought breakfasts of Sachertorte from the previous night’s party and the smell of grilled-sausage weaving its way through the sharper perfumes of cold air and pines. Each morning brought the rustle of down comforters and the click of ski-bindings.

New details occasionally entered the picture, altering it only slightly. One year might usher in a nicer new bar, another year a renovated ski lift, or more efficient parking. But we stuck with the old bar. And though warmer and faster, the new ski lift lacked the old one’s friendly hum. The new parking lot, less muddy, failed to humble fancy cars as ruthlessly as the old one.

Other things changed too. The fashionable ski-jacket began to look dated. The Queen of the Autostrada became the Queen Mother, regal but dowdy.

Children grew. They put ski clothes on by themselves. They no longer cried if they didn’t win the class ski-race. They began to ski on their own, to take themselves out for pizza and notice the opposite sex.

By the end of our stay, when the snow became muddy and over-skied, the routine of city life beckoned just as the mountains had a few weeks before. We’d pack up the Queen again and head down the valley. Now Mozart was our soundtrack. No one but Wolfgang Amadeus could simultaneously capture the joy and melancholy of splendid mountains and passing time.

Last weekend I went to Cortina. I stayed in the big, ramshackle villa. I had Sachertorte for breakfast. Every morning brought the usual round of phone calls: “Who’s coming, where are we skiing?” The air was just as fresh, the mountains as pink, the grappa as sharp. Nothing seemed changed.

Except that my children are grown and gone. Bad knees complicate the morning phone calls, fastidiousness about snow conditions and early hours. The ramshackle villa is being divided into apartments at season’s end.

Just as our skin thins to reveal the bones beneath, Cortina’s blush is a bit off too. The plywood on hotels under renovation has turned from gold to gray and the cranes are idle. Familiar stores have closed. Many houses have not opened their shutters this year. The cream of Veneto society drives last year’s car model. Faces in the party pictures of the local glossy magazine are older. The magazine’s nostalgia section, which features better days with Hemingway, Bardot and the first “Pink Panther” film, is thicker.

I forgot to change the soundtrack to Mozart for the drive back to Milan. I was stuck with Peter, Paul and Mary’s “Puff the Magic Dragon” in the lost land of Honna Lee and The Byrds’ “…to everything there is a season…turn, turn.” It was all melancholy and little joy.

Until my phone rang. It was my teenaged daughter in America. We reminisced a bit about the old days. I struggled to put feelings into words.

“Mom,” she said, “it’s like when you know a friendship is dying. You try to hold on. You still laugh at all the old jokes. But you both know the truth.”